Fast & Furious 6 (F&F 6), the sixth film in Fast & Furious movie enterprise, is set to hit Indian screens on May 24, 2013. From the released theatrical trailers, the new flick is expected to be the most intense and high speed action-packed part in the series. 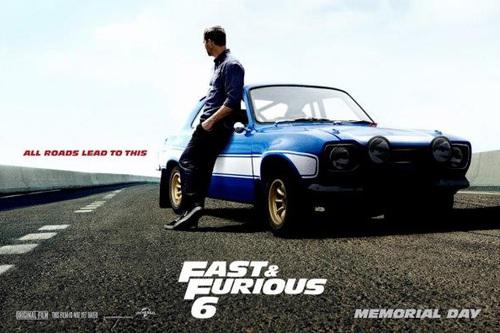 F&F 6 has the hit male lead combo of Vin Diesel as 'Dominic Torreto' and Paul Walker, who returns in his most famous role as 'Brian O'Conner'. Further, Michelle Rodriguez (as Letty Ortiz) and Jordana Brewster (as Mia Torreto) come again as the respective flames of Diesel and Walker in the movie. The other important cast members are Luke Evans and Jason Statham, while Dwayne Johnson returns in the latest flick as FBI agent Luke Cobbs. The supporting cast, comprises Tyrese Gibson as Roman Pearce, Sung Kang as Han, Chris 'Ludacris' Bridges as Tej Parker, Gal Gadot as Gisele Harabo, Gina Carano as Riley and Elsa Pataky as Elena Neves.

The intensely shot action sequences of the F&F 6 feature several super sports cars, American muscles, aircrafts, military grade trucks, military tanks and jeeps, either getting blown away or crushed. Fast & Furious 6 cars are in the league of their own and could enamour any automobile enthusiast. Over the years, American muscle and Japanese sports cars have mostly dominated the previous five Fast & Furious movies, but the latest part has also brought in Ferrari, Pagani Zonda and legendary British cars like the Ginetta G60 and the Jensen Interceptor.

Vin Diesel gets behind the wheel of his 1969 Dodge Charger Daytona in the new Fast & Furious 6, while Dwayne Johnson is back with his Gurkha armoured truck that was seen in the previous movie Fast Five. Michelle Rodriguez is seen riding a tank in one of the action sequences and drives the British classic Jensen Interceptor sports car. The mid-engined Ginetta G60 and Ferrari SP1 set pulses racing in the F&F 6, while a Dodge Challenger and a Nissan GT-R are part of a breathtaking race sequence in the movie. Mercedes-Benz SLS AMG, Lotus Elise, Jaguar E-Type, Chevrolet Camaro and Ford Escort are the other cool cars used in Fast & Furious 6.

Renault-Nissan ramps up capacity of their Indian unit