Mahindra KUV100 NXT has been launched in India. The updated KUV100 comes with a few cosmetic updates and a host of features added over the older car. It’s only been a couple of years since Mahindra launched the KUV, but the carmaker has updated the micro-SUV to keep it fresh against the competitors. Here is how it fares against all the B-Segment hatchbacks in a competition check. 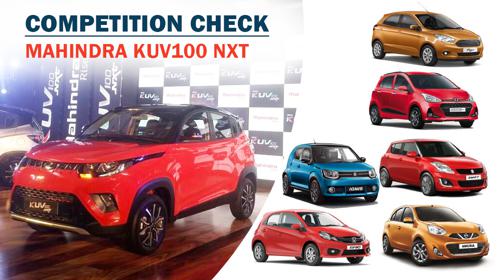 The Ignis entered this part of the market to take away the game from the conventional looking hatch with its contemporary styling. However, it didn’t GO overboard with the SUV-esque styling like the KUV100. The Ignis is aimed at the millennials and it does a very good job of attracting them with its features list and unique styling. With this update, the KUV100 now tries to bridge the gap in terms of equipment with a few styling tweaks as well.

The Grand i10 is Hyundai’s highest selling car. The B-segment hatch got an update recently and is fresh enough to prove an effective rival against the updated KUV100 NXT. The Grand i10 now features an improved engine and a four-speed automatic transmission. The KUV100 misses out on the automatic gearbox, but makes up for it with the six-seater configuration as standard.

Since its introduction, the Swift has been the undisputed leader in this segment. The earlier KUV was introduced with an SUV-ish approach, but so far, it has not been very successful in dislodging the Swift from its pedestal. Right now, the Indo-Japanese carmaker is gearing up for an all-new Swift next year. Until then, the KUV comes in as a standard six-seater in this segment which is currently unmatched by anyone.

The Figo is the most powerful hatchback in this segment. The Figo gets two petrol engine options that can outrun the homegrown KUV100 easily. There is a six-speed automatic transmission on offer as well. The Figo is a proper hatchback; it is practical, comfortable and feature loaded. It rides and handles well too and comes with six-airbags.

Nissan’s Micra may not be a volume seller, but the Japanese hatch comes with a CVT automatic transmission. The Micra’s bulbous styling is subjective but a dash of chrome all around the car adds a little character to the rounded hatch. The current Micra is long in the tooth now and is in need of not just a cosmetic update but a generation change altogether.

Honda has updated the Brio hatchback recently. The Brio’s peppy i-Vtec petrol engine and quality handling set a benchmark for the KUV100 to reckon with. The Brio does offer an automatic transmission, but not with the diesel engine. Despite being updated just last year, the Brio has started to look dated. The NXT update is not very spectacular but it keeps the the KUV100’s design looking fresh.