The new Mahindra KUV100 NXT, a Compact SUV from Mahindra, was launched in India in Oct, 2017. KUV100 NXT has received 76% rating score from our users. KUV100 NXT is preferred for its Comfort and Styling. Earlier, the KUV100 NXT was available with the now-defunct 77bhp/190Nm 1.2-litre diesel mill and what’s on offer today; an 82bhp/115Nm 1.2-litre petrol motor. This review is all about the former, just in case you were interested in picking up a used one. It’s a five-speed manual, this three-cylinder diesel, and considering how Mahindras usually are, it’s interestingly unobtrusive at idle. As you get on the move, it remains fairly refined unless one revs it past 3,500rpm. Which in any case is understandable bearing in mind a three-cylinder mill could never match the refinement of a four-cylinder one.

Off the mark, power delivery is adequate and smooth right from the word go. And making this possible is the rather tiny turbo. It makes sense too. A small turbo dampens the turbo lag effectively, resulting in seemingly linear power delivery from lower revs even under hard acceleration. Nevertheless, you simply can’t ignore the narrow torque band because it more or less loses steam by the 3,500rpm mark. We eventually learnt that the best way to maintain progress is to keep the motor spinning between 2,000-3,000rpm. Although these personas largely make the KUV ideal for city runs, the short-throw gearbox, too, lightens the experience through crisp shifts via well-defined gates. On the downside though, the clutch pedal suffers from both a springy action and extensive pedal travel which can seem like a burden at times.

Thanks to its compact dimensions, responsive diesel motor, and good all-round visibility, the KUV feels right at home within city limits. However, the steering isn’t up to the mark. Although light, it feels slow with four turns from lock-to-lock and vague too, overall. These make parking in tight spots, especially, feel more like an arm chore than anything else. As for the ride quality, the KUV has been tuned purely for comfort and as a result, the setup feels soft. At low speeds, this compact Mahindra takes on bad roads with ease, delivering a comfortable ride even while going over bumps and potholes. At high speeds, however, it isn’t as comfortable as you’d expect owing to the soft nature which gives away constant vertical floating movements; more so under full load.

The cabin of the KUV100 NXT is a surprisingly spacious and fairly modern one. It’s got a sporty all-black theme and like with most new cars, there’s both piano black and silver trim for the centre console. It’s a clean layout so to say too. Otherwise, the only snag we encountered was the blower speed knob being needlessly firm to operate. A highlight though is the seven-inch touchscreen infotainment system that’s home to regular functions such as USB, GPS navigation, and video playback.

Meanwhile, our test car you see here has a unique six-seat layout which is a result of the dash-mounted gear/handbrake lever. Although an interesting approach to squeeze in a front middle seat, the sad part is that the bottom portion of the centre console fouls with the middle seat occupant’s knee room. Nevertheless, the front middle backrest folds down to showcase some storage/cup holders and amusingly doubles up a centre armrest.

Back in the rear, you sit high with a flat floor, there’s ample space for two occupants with plenty of headroom, along with adequate knee-room and thigh support. And, because I love to nitpick, it’s the complete absence of seat contours that makes for literally no lateral support. When it comes to the boot, it’s good for some slim baggage and a few shopping bags at best.

Well, this quirky Mahindra certainly wears a love it/hate it cloak. And admittedly, I’m more of the latter kind. It reminds me of those dudes who’re into body-building but don’t pay attention to their legs and end up like a rooster! Jokes apart, the Mahindra family grille finds its way onto the KUV’s nose, which is a good thing, right? Yes, because that’s the only portion that gives it any character. But in profile and at the rear, there isn’t much to brag about. I mean seriously, what were you expecting from me?

So, there you have it, apart from the indigestible appearance, the Mahindra KUV100 NXT has plenty going for it as a result of its spacious cabin, comfortable low-speed ride, light controls, a decent set of features, and a reasonable asking price that ranges from Rs 7.10 lakh to Rs 9.16 lakh (OTR Mumbai). For those who find the KUV’s shapeliness pleasing or just do not care much about it, there are very few options left in case the hunt is on for a spacious city car that can handle bad roads with aplomb.

Based on 213 User Ratings

How KUV100 NXT fares against competition?

Among Mahindra KUV100 NXT alternatives, Hyundai Grand i10 Nios is the best in terms of Styling, Comfort, Performance, Mileage and Value for Money.

Find a list of all 5 petrol versions of Mahindra KUV100 NXT. This table includes on-road price which covers all costs like RTO and Insurance.

The Mahindra KUV100 NXT is an updated version of the KUV100 compact SUV. It was launched in this avatar in 2017 and can be had in four variants, one engine options and eight colour options including two dual tone schemes. The KUV100 competes against the mid-size hatchbacks like the Ford Figo, Hyundai Grand i10, Maruti Swift and the Maruti Suzuki Ignis.

The most significant change in terms of design is a completely new face for the NXT. It comprises a vertically stacked design for the overall appearance. The headlamps have got a new design while the front bumper has moved from a conventional design to a sportier one to give the car a crossover appearance. With the NXT, you get a new design for the alloy wheels/wheel covers while at the rear the tail lamps have become wider and now come with silver inserts.

Inside, the KUV100 NXT is now a standard six-seater, but you can also order for a five-seater model. The overall layout of the cabin has not changed, but you now get a seven-inch touchscreen infotainment system in the top spec variants in place of the 2-DIN unit that was offered in the outgoing model. Mahindra has also got rid of the multi-dial design for the air-con system and has replaced it with a minimalistic button style setup. The four-speaker music system gets Bluetooth and USB connectivity along with steering mounted controls.

The KUV100 NXT is now only offered with the petrol mFalcon G80. It’s a 1.2-litre three-cylinder petrol engine that develops 82bhp and 114Nm and is mated to a five-speed transmission. The G80 engine is a micro-hybrid with start-stop technology. 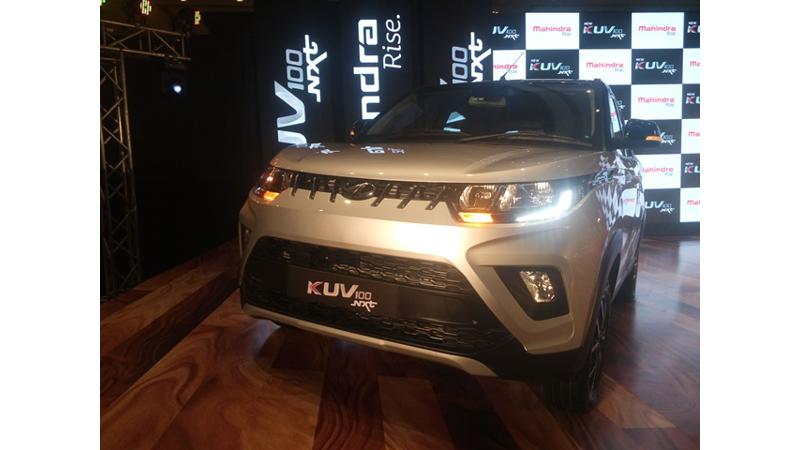 Mahindra has launched the KUV100 NXT in the Indian market and has priced its eight variants starting at Rs 4.39 lakhs (ex-showroom Mumbai). This is a major update for the Indian automaker&rsquo;s 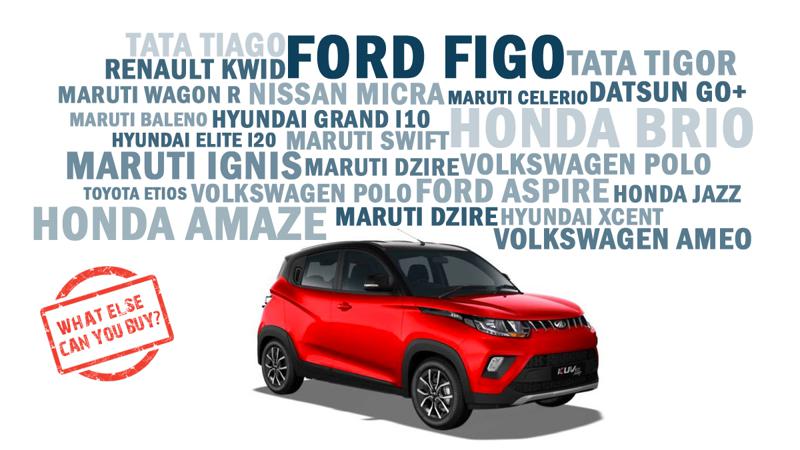 Mahindra KUV100 NXT What else can you buy

The new refurbished Mahindra KUV gets an NXT badge and a few nips and tucks. The petrol trims start at Rs 4.39 lakhs, ex-showroom for the K2 trim, going all the way to Rs 6.4 lakhs. The diesel begins

Mahindra KUV100 NXT has been launched in India. The updated KUV100 comes with a few cosmetic updates and a host of features added over the older car. It&rsquo;s only been a couple of years since