Experts speculate that BMW has now begun to understand what plug-in hybrid buyers are primarily looking for. Their latest 530e plug-in hybrid rhymes more with efficiency than with outright-performance and driving enjoyment. Here’s a peak at how its powertrain works. 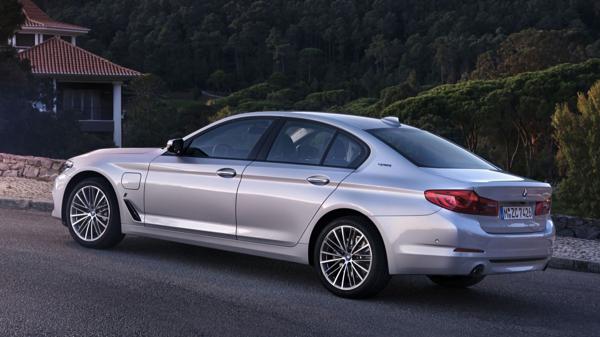 Under the hood of the BMW 530e is a 2.0-litre four-cylinder turbocharged petrol engine. The eDrive AC synchronous electric motor sits in a gearbox bell housing that’s housed between the petrol engine and the eight-speed automatic ‘box. With a combined total output of 248bhp and 420Nm of torque, this powertrain can sustain the car over a total range of 650km for each charge. A 9.2 kilowatt-hour lithium-ion battery pack is fitted under the rear seats and is also the reason why this e-sedan can cover 50km on pure electric power.

Reports state that this powertrain primarily makes use of electric power to pull away unless the throttle is pushed to the maximum. The combustion engine makes more noise than you would expect when it comes on, and it isn’t as snappy as you’d guess in its power delivery, even in kick-down situations. The carmaker claims that the 530e can hit 100kmph from standstill in 6 seconds (xDrive does it in 5.8 seconds), before registering a top speed of 234kmph.

To make most of the engine’s power while fulfilling the efficiency that’s demanded of it, the 530e gets modes like Auto eDrive, Max eDrive and battery control. While ‘Auto eDrive’ mode lets the system automatically choose a powertrain to deliver the best efficiency, it can do up to 90kmph in EV mode. The ‘Max eDrive’ mode favours more of electric power, and in this mode, the 530e can hit speeds up to 140kmph in EV mode. The ‘battery control’ mode allows the petrol motor to charge the batteries and power the 530e too. However, the ground-breaking deal with 530e is that BMW offers a new wireless charging system that they built with help from Daimler-Benz.

This wireless charger juices up one-third of the battery in 3.5 hours. And the highlight is that ‘BMW Connected’ gets the car to sense the two-foot square charging pad under the car while the driver is guided over the pad through the assist on the dashboard’s centre screen. BMW has also taken into account a few other safety measures taking into account the fact that animals like to lie under a car. And under such circumstances, the system will detect the anomaly and automatically switch it off. The wireless charging hasn’t gone on sale yet and is expected to be pricier than a wall charging unit.

Five years ago, BMW began its venture into the plug-hybrid car space with a 3.0-litre petrol motor mated to an electric motor. It was a combination that didn’t spell the promised efficiency figures back then. However, with the current 530e and its apparent slant towards efficiency over the fun-to-drive proposition, it sure looks like BMW has latched on to the trend.