Aston Martin has taken the wraps off the V8 powered DB11 ahead of its public debut at the 2017 Goodwood Festival of Speed. The entry-level DB11 makes use of AMG-sourced V8 to take on the likes of Bentley V8 Continental GT and Porsche Panamera Turbo. 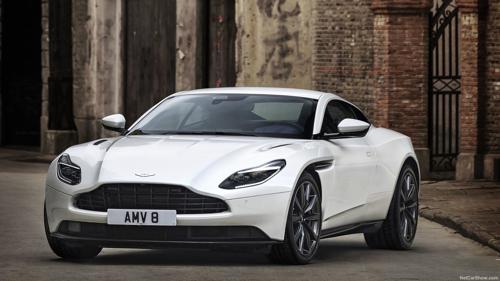 Housed inside the baby DB11 is the new 4.0-litre biturbo V8 motor from the AMG GT line. Power output here is a whopping 503bhp and 675Nm which can easily propel the baby flagship from 0-100kmph in just 4 seconds and then on to a top speed of 301kmph. That’s just 97bhp and 100Nm short of the V12, but is only 0.1 second slower than the tonne. One reason for these incredible performance figures is that the V8 DB11 is 115kg lighter that the V12, which tips the scale at 1,760kg.

The subtle visual changes to the entry-level flagship include a new alloy wheel finish, dark headlamps bezels and a pair of bonnet vents instead of the quartet as on the V12. The interior is identical with the same trim options and equipment along with extensive colour choices. As with a car of this calibre, extensive personalisation options can be availed as well. 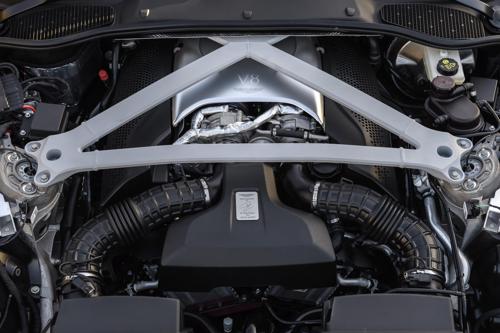 The DB11 also has specially tailored air intakes, exhaust system and a wet sump lubrication system. The V8 engine has undergone electronic calibration with throttle mapping and ECU reprogramming to ensure that it performs as an Aston Martin rather than a mad AMG. However, since the V12 DB11 is a grand tourer, Aston Martin wants to position the V8 as a more dynamic vehicle. The V8 is mounted on new engine mounts which are positioned as low as possible to attain an ‘optimised’ centre of gravity, stated Aston Martin. This gives the V8 DB1 better agility which is further exploited by revisions to the suspension bushing, geometry, anti-roll bars, springs, dampers and ESP software. With a ‘dynamic character distinct from that of the V12’, the V8 is expected to be the perfect choice for a customer who wants a comfortable yet sporty GT, according to the Gaydon-based carmaker.

The V8-powered DB11 is on sale in the UK already, retailing at a price of £144,900. That’s a whole £13,000 less than the V12 brethren. Deliveries for the baby GT will commence later this year. It also becomes the first car to roll out after the British marque entered into a partnership with Daimler and the German giant bought five per cent of its share. As a part of the deal, Daimler will provide powertrains, entertainment, navigation and other systems to future Aston Martins.

The updated Lincoln MKX spied for the first time