A star-studded gathering attended the unveiling of Indian adaptation of the popular international TV series, which will be shown on the Colors channel. The Indian version of this show will feature Bollywood actor Anil Kapoor, who was also a part of the international series. Based on espionage, 24 will also star the likes of Shabana Azmi, Anupam Kher, Tisca Chopra, Mandira Bedi and will be directed by Abhinay Deo, who made the critically acclaimed Imran Khan starrer Delhi Belly. The makers of 24 have pinned high hopes on the show to further improve its TRP. Tata Motors, the country's leading auto maker, has cashed in on the popularity of the show by becoming its main vehicle partner. Playing the lead role, actor Anil Kapoor will be seen driving the Tata Safari Storme Explorer Edition, which was introduced by the Indian auto giant. 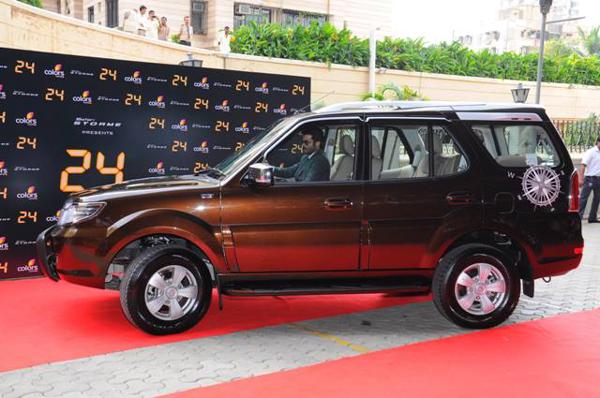 Industry experts feel that this is a good move by the auto maker to gain popularity and lay a platform for the Safari Storme Explorer Edition. Speaking about the association of the firm with the show, Delna Avari, Marketing Head for Passenger Vehicles at Tata Motors, drew a parallel between the car and the series. “We tied up with a show like 24, not just because it was new and was going to change the way Indian television is viewed. 24 and Storme both have intense energy and are capable of action and high speed. It made sense to tie up with a show which has all the characteristics of our SUV,” she said.

It is being said that the collaboration between one of the leading auto makers in country and a popular TV series is likely to prove beneficial for both. On one hand, Tata Motors will gain an advantage as Anil Kapoor will be seen driving the Safari Storme Explorer Expedition. This will help the company to showcase the good points of the Sports Utility Vehicle (SUV), such as power, performSafari Storme is considered to be oance and solidarity. Meanwhile, the show will benefit as the ne of the most popular SUVs in the country. The Indian adaptation of 24 will feature Anil Kapoor in the lead role, wherein he will play the protagonist Jai Singh Rathod, the Chief of ATU.

Interestingly, 24 is a fictional show that has a real time narration, which traces the daily happenings in the life of protagonist. The international show, 24, starred actor Kiefer Sutherland playing the role of Jack Bauer (Jai Singh Rathod in the Indian version played by Anil Kapoor), who is a part of the Counter Terrorist Unit (CTU). Apart from Sutherland, the show starred Mary Lyn Rajskub, Carlos Bernad and Elisha Cuthbert. 24 has been appreciated for its gripping storytelling style along with an excellent screenplay. Over the years, the show has earned coveted awards including the Golden Globes and Primetime Emmy Award.

Raj Nayak, the Chief Executive Officer for Colors, spoke about the kind of impact the show is capable of making. “24 is our first big initiative for producing a world class, international format fiction show, which we believe has the potential to change the standards of television production values and scale in India pushing all boundaries of content, production and packaging. Presented on a never-seen-before scale with a top Bollywood star as a lead protagonist, 24 promises to bring a paradigm shift for TV content in India. The success of 24 will not just be great for Colors but for the whole television industry,” he said.