Toyota Kirloskar Motor, the Indian arm of well known Japanese car company, has made an significant milestone in the domestic auto market by launching the Camry Hybrid model for Rs. 29.75 lakh (ex-showroom, Delhi). Reportedly, the all new Camry Hybrid happens to be the first ever locally produced hybrid model in the Indian auto industry. Also, with this move, India is now counted among the nine countries all over the world to roll out a hybrid car of Toyota. Sources close to the development process revealed that this hybrid model will be produced at a separate assembly line within the second plant of Toyota Kirloskar Motors, located in Bidadi, near Bangalore. Also, bookings and deliveries of the model have started with immediate effect. 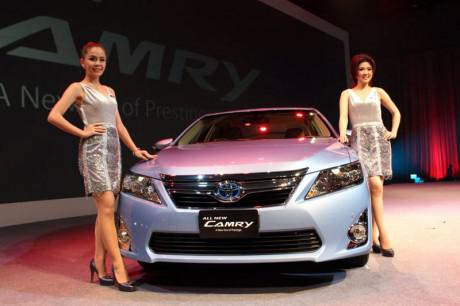 Expressing his views at the launch ceremony, the Managing Director and Chief Executive Officer of Toyota Kirloskar Motor, Hiroshi Nakagawa said, "Toyota is a pioneer in Hybrid technology and thus we were very keen to manufacture the all New Camry Hybrid in India, as well. This is in line with Toyota's global philosophy to encourage the use of hybrid vehicles across the globe, for a greener tomorrow. Manufacturing Camry hybrid locally will be yet another step towards Toyota's global commitment."

The recently launched model has been equipped with pioneer advancements of hybrid technology. Interestingly, the auto maker has delivered over 5 million hybrid cars all over the world. The 2013 Camry Hybrid is powered with a performance oriented 2.5-litre beltless petrol engine, which has been specifically developed for it, combined with an electric motor. The maximum power churned out by the combination of these engines stand at 203 bhp, which seems to be quite impressive for this segment models. Adding to the performance of this engine, an Electronically Controlled Continuous Variable Transmission (E-CVT) has been fitted within the car, which channelise the produced output to its wheels.

The Deputy Managing Director and Chief Operating Officer for Marketing and Commercial at Toyota Kirloskar Motor, Sandeep Singh was quoted as saying, “Our main objective behind introducing this product in India is to further generate awareness on hybrid technology amongst Indian customers. The New Camry Hybrid is an ideal combination of a luxury sedan and hybrid technology. The new Camry Hybrid will definitely distinguish our customers as responsible citizens."

Along with a brilliant output, the new Camry Hybrid returns best in class fuel economy of 19.16 kmpl with a low CO2 emission of 122.8 gm per km. Industry experts are of a view that the launch of a new model by Toyota Kirloskar Motor can pull in some decent volumes for the auto maker during not so good times in the Indian auto market.