An undisguised version of the 2013 Tata Nano, being used as part of a new television commercial in Mumbai, has been spotted by Shubhankar, a regular reader of Overdrive magazine. Though the outlook of vehicle looks the same as the current version, some cosmetic changes appear to have been made. 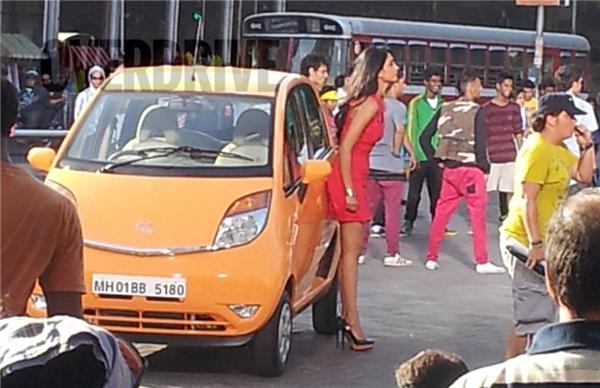 At the front, a large chrome strip runs along the bonnet, making the Nano appear all the more appealing. There is an additional air intake on the rear bumper, which indicates a provision for better cooling of the engine. The Nano’s centrally mounted instrument cluster is still exactly in the same place as the current version in the market. On the inside, no noticeable changes have been made.

It is likely that a few interior changes may also be incorporated in the new Nano. Dual speakers and two glovebox compartments would be seen integrated into the dashboard. There are high chances of the instrument cluster being revised for the 2013 version.

The current petrol-engined vehicle will be made compatible for CNG in the future, with an aim to deliver greater mileage. In addition, an 800 cc turbo diesel engine is also expected to be installed in the Nano later this year. This turbo diesel would generate a maximum power of 42.5 bhp. News of the upcoming CNG and diesel variants has already been covered by several auto magazines and websites.

It is expected that the commercial production of Tata Nano diesel will commence from February 2014. Tata Motors is likely to use a plastic fuel tank in this car, in order to reduce weight. At present, the production of the Nano has been cut by almost 80 per cent, to keep inventories as per demand. Previously, a large number of Nanos were seen parked outside the Sanand plant in Gujarat.

Now, it is clear that Tata Motors really wants the Nano to do well and is making every attempt to rewrite the success of the ‘Rs 1 lakh car’. Marketing initiatives will also play an important part in determining the fate of this vehicle in the future.