Tata Motors is offering adventure motor sport enthusiasts a chance to witness some thrilling action with its Xtreme Drive, a unique off-roading event to showcase the abilities of its Safari Storme in Mumbai. With different obstacles such as See-Saw, Bumble Bee, Bat Fight and Rumblers in the Storme’s path, this event has already seen scores of enthusiastic participants at the MMRDA grounds in Bandra, held in Mumbai from April 26 to 28, 2013. The next leg of the Tata Motors Xtreme Drive is to be held from May 4-5 at the Airoli Ground (Patni Centre). 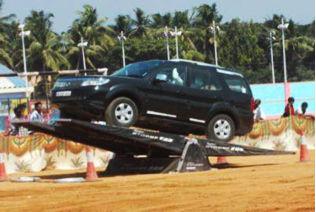 Tata Motors is making a strong attempt to showcase the technologies, performance and comfort of its Safari Storme Sports Utility Vehicle (SUV). The sales of this vehicle have not been particularly high, but this event seems to be a great way of highlighting the Storme’s strong selling points. Speaking about the response to the Xtreme Drive, Ranjit Yadav, President of the Passenger Vehicle Business Unit, Tata Motors was quoted as saying, “The Tata Safari Storme is a go-anywhere vehicle, a combination of technology, performance, style and comfort, and is ideal for today's motorists. Through Tata Motors Xtreme Drive, we hope to give customers and enthusiast alike, an experience of what this Real SUV is capable of, in their vicinity. The initiative has grown incredibly in the past five months, with over 10,000 experiences across 60 cities.”

Under its hood, the Tata Safari Storme is fitted with a 2.2 litre VariCOR diesel engine, which develops a maximum power output of 139 bhp and torque of 320 Nm. While the engine is not very different from the 2.2 litre DICOR powertrain that was used in the previous version, several exterior changes have been made. There is a lot of chrome on the front grille and shape of headlamps has been changed. The tyre on the rear door of this vehicle has been removed, making it lighter. Its monocoque chassis is the same as the one used in the Aria, which means that rigidity and body control is better than the previous Safari. At present, the new Safari Storme is currently priced between Rs. 10.28 lakh and Rs. 14.12 lakh (ex-showroom Delhi).