The Kia Carnival was launched at the Auto Expo 2020 and bridged the gap between premium MPVs like the Toyota Innova Crysta and the uber-luxurious MPV, the Mercedes-Benz V-Class. The Carnival is available in three trim levels, three colour options, five variants in total and a single drivetrain with prices starting at Rs 24.95 lakh, ex-showroom Delhi. It does not have any direct MPV rivals.

Further to this, read  Kia Carnival Road Test details by our expert.

The Carnival follows a function-before-form philosophy, but has enough design flourishes to keep it from looking like a boring boxy people-carrier. Every corner is curved, there is just enough chrome used around the car to catch your eye but not overwhelm your senses and signature Kia design elements like the ‘Tiger nose’ grille and large lower fog-lamp cluster give the Carnival an understated premium look.

The Kia Carnival’s dashboard design is a bit busy compared to the simple-yet-elegant exterior design, it also looks a bit dated which is expected considering this MPV is almost six years old. The beige-and-black interior theme adds to the roominess of the cabin, twin sunroofs can also be used to light up the cabin even more. Depending on your needs, you can get the Carnival in seven-seater, eight-seater or nine-seater configurations, but the seven-seater variant with the ‘VIP’ seats for the second row is the one to go for if you want to experience business-class-like seating.

The Kia Carnival is offered with a single powertrain option. A 2.2-litre, four-cylinder turbo-diesel motor powers the MPV, developing 197bhp and 440Nm of torque. Power is sent to the front wheels via an eight-speed automatic transmission.

Find a list of all 6 diesel versions of Kia Carnival. This table includes on-road price which covers all costs like RTO and Insurance. Kia’s second product in India after the Seltos is the new Carnival. Slated to go on sale at the 2020 Auto Expo, the Carnival is a luxury MPV and the flagship product from Kia targeted at the premium end of things and& Kia’s second product in India after the Seltos is the new Carnival. Slated to go on sale at the 2020 Auto Expo, the Carnival is a luxury MPV and the flagship product from Kia targeted at the premium end of things and aimed to start a whole new segment for itself. Expected to be priced between Rs 30-40 lakhs ex-showroom, the Carnival will be offered in seven-, eight- and nine-seat configuration across three trims and a choice of BS6 compliant diesel powertrain. This means it will come as a versatile alternative to the likes of the Ford Endeavour, Toyota Fortuner and the Skoda Kodiaq. 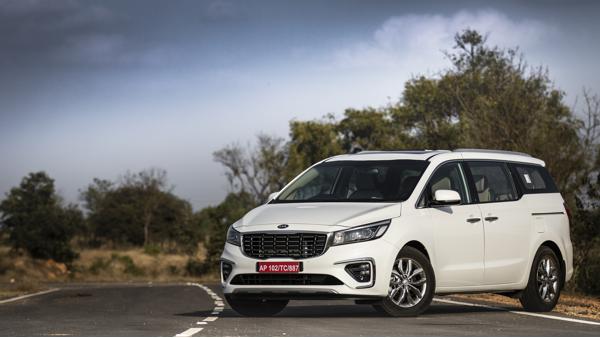 The Carnival is a large and imposing vehicle measuring 5115x1985x1740mm with a wheelbase of 3060mm. In terms of styling, the upright fascia gets a large tiger-nose grille with square-gated design and is flanked by sleek yet large wraparound headlamps. These headlamps get LED projector units while the fog lamps have ice-cube DRLs along with black surround and chrome garnish. The humongous proportion of the Carnival is felt in the silhouette and similar to the Mercedes-Benz V-Class, the Carnival has those unconventional sliding passenger doors. But, it appears to be well-proportioned with its floating roof design and the kink past the C-pillar. For the 18-inch wheels there are two alloy designs to choose from, one of which is the ‘Sputtering Finish’ one that you see here. At the back, the squared-off tailgate is simple with a straightforward square taillamp design, LED lighting signature and faux skid plates on the bumper. Currently, there are only three colour options to choose from – black, white and silver. Similar to the exterior, the Carnival is large and opulent on the inside. In the top-spec Limousine trim we are driving here, the cabin gets Napa leather upholstery, soft-touch materials on the dashboard and the door pads as well. Inside the cabin, the sense of spaciousness is instantly felt which is further helped by the large window area because of which, the visibility is phenomenal too. The dashboard is well laid out and there are many usable storage places present all around the cabin as well including the dual glove-box. Meanwhile, the instrument cluster gets two analogue dials flanking a MID screen. On the centre console, you get an eight-inch touchscreen system. Talking about the seats, this is where the Carnival gets interesting. The front seats are large and offer a good amount of support all around. In the top-spec trim, the driver’s seat is electrically adjustable and it also gets cooled ventilation but the front passenger seat misses out on both these functions. Kia is offering the Carnival in seven-, eight- or even a nine-seat configuration. Lower spec models get something called standup seats which fold upright allowing better ingress, while there’s something called ‘sinking seats’ which have got a clever mechanism allowing them to fold down flat on the floor. Then there are the Limousine’s VIP seats available only in a seven-seater configuration with special reclining and sliding adjustments along with leg extension. Getting inside the Carnival is easy thanks to the sliding doors but the ingress height isn’t very convenient. Similar to the front row, visibility in the second and third row is more than adequate due to the massive windows and light coloured materials used. There’s sufficient head and legroom too as the middle row seats have multiple adjustments while offering ample support and seem to be comfortable enough for cross country drives. The third-row, however, is a tight fit for three with no under-thigh support. But it isn’t a bad place to be in either. And the ‘sinking’ split seats can also be folded down for large and usable boot space. 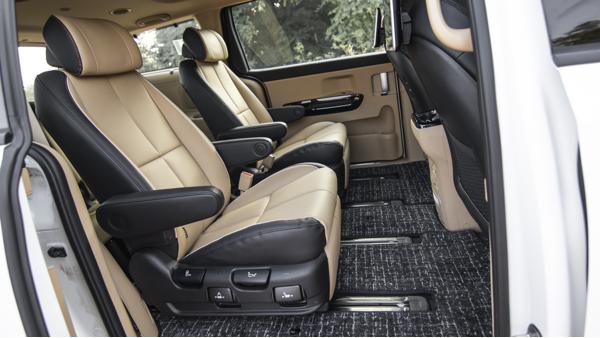 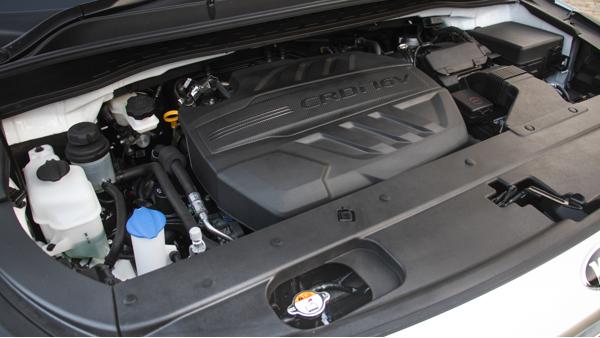 Kia is offering the Carnival in India with an all-new BS6 compliant 2.2-litre four-cylinder diesel engine. It produces around 197bhp at 3800rpm and 440Nm of torque is available between 1,750-2,750rpm. Meanwhile, the power is sent to front wheels via an eight-speed automatic gearbox. This diesel engine is quite refined and we could barely hear it working inside the cabin. There’s ample low-range grunt from the turbodiesel to get this rather heavy people mover off the mark and also to keep pottering around at city speeds. But what impresses the most is the strong midrange. There’s barely any lag from the motor and the Carnival will happily dart around the traffic with ease concealing its mammoth proportions. The Korean MPV manages to cruise at three-digit speeds as well and we are sure even with its nine seats full it won’t feel out of breath on the highways making it an ideal choice for long-distance touring. Also, the Carnival doesn’t let you know that you are at the helm of such a large vehicle. However, the steering is not very responsive off-centre and it feels overly assisted too. Around tighter corners, the Carnival tends to understeer a lot and there’s no hiding its pronounced body roll. Therefore you’d have to drive it like a people mover that it is. In terms of ride quality, the Carnival is plush at low speed and the suspension manages to soak in every bump and irregularity with ease. Even the sharp and ragged edges aren’t felt inside the cabin. At higher speeds, ride becomes flat over long undulations and soft suspensions don’t bounce over rough surfaces either. On the down side, we wished the brakes had a slightly better performance to inspire confidence in stopping. 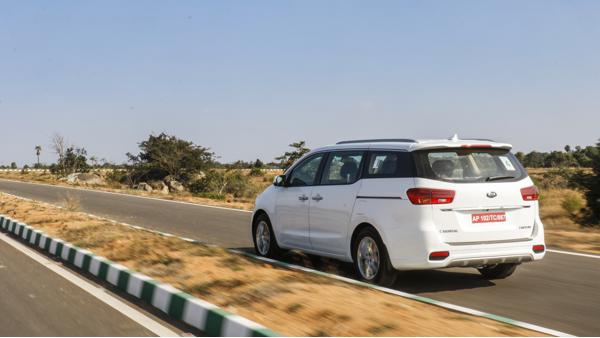 Kia has managed to well-package the Carnival with its imposing proportions, large and practical cabin space, long feature list, refined engine and well sorted driving dynamics. Carving out a niche for itself, the Carnival is a premium MPV which could be an upgrade from Toyota Innova. With its price range, it would also be a viable choice for buyers forced to by full-size seven-seater SUV even when they don’t really have the need of a rugged 4x4.

The on-road price of the Kia Carnival in Delhi starts at ₹ 25.15 Lakh for the diesel engine. Meanwhile, the top end model (Carnival Limousine Plus 7 STR) with diesel engine is priced at ₹ 34.48 Lakh.

No. 4x4 drive option is not available in any of the 6 versions of the Kia Carnival.

Kia Carnival top version is Limousine Plus 7 STR. It is priced at 34.48 Lakh in Delhi.

Note: Specifications for Carnival Premium 8 STR have been mentioned 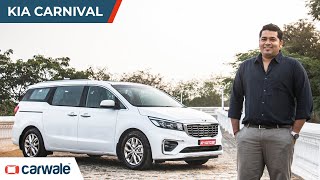 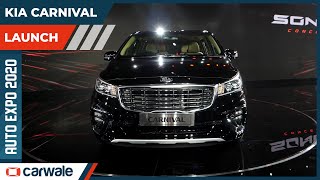 Kia will launch the all-new Carens in India sometime in Q1 of 2022. Kia to introduce a new variant in the Carnival line-up; likely to be launched in September 2021

The Kia Carnival MPV is currently offered in three variants that include Premium, Prestige, and Limousine. The model is powered by a 197bhp 2.0-litre diesel engine.

The Carnival is available in four variants, namely Prestige, Premium, Limousine and Limousine Plus.