The latest Toyota Vellfire, a MUV from Toyota, was launched in India in Feb, 2020. Vellfire has received 88% rating from our users. Vellfire is preferred for its Comfort and Performance. Premium luxury MPVs are now slowly entering the Indian market despite the bleak sales which can be attributed to the exorbitant price and humungous size. Yet, that doesn't mean there isn't a demand, and it was Mercedes who first catered to this requirement with the V-Class. Now Toyota will join the bandwagon by introducing the Vellfire in our country. In fact, it wants to take a step further by introducing a hybrid variant of this luxury MPV in India. We test drove it at their plant in Bangalore and here are its first impressions.

You have seen the Innova and when we say the Vellfire is bigger than it, you can imagine how huge this vehicle is. It's a more premium and sportier version of the Alphard that's available globally. Sure, the Vellfire looks like a typical MPV but Toyota has managed to make it appealing with a lot of striking features. Take for example the upright nose that houses a chrome-laden grille and sleek split-LED headlamps. Even the 17-inch chrome alloy wheels add character to the relatively clean profile. Moving on to the back, you'll notice the split-LED tail lamps that sport a clear glass that are connected by a thick chrome strip. Apart from beefy bumpers, there's quite a lot of bling added with the heavy use of chrome to suit the Indian car buyer's taste.

Looks are just one small aspect, but what will interest buyers more is what its cabin packs. The interior layout with a leather-wrapped steering, digital instrument cluster and large infotainment system is similar to that of the Fortuner and Innova, but with better quality of materials. There’s heavy usage of wooden inlays for the dashboard, door pads and panels. Though the cabin is spacious, things fall easily to hand with most controls ergonomically placed. Furthermore, view out of the cabin is excellent due to its large glass-house.

Then, we stepped into the second row as the powered door slid back to reveal not seats but two thrones! These big beige/black coloured seats are electrically adjustable and provide the perfect comfort one can expect of it. They are ventilated and wrapped in leather to provide a premium touch and feel. Like the front seats which are firmly padded and provide adequate support, these ones are similar but with arm-rests, headrests with support and even a tray housed inside. It’s large enough to accommodate a phone/tab but not a laptop. Yet, most controls inside are through buttons and there are plenty of useful storage and stowage places. There’s also ample legroom, shoulder room and headroom providing a luxurious middle row experience. Even getting in the third row is easy. Besides, it’s very spacious, in fact the best we have witnessed in an MPV. Still, apart from the ones in the third row, no other passenger will complain about under-thigh support. In fact, the co-passenger and second row of seats get ottomans for additional comfort.

The Vellfire will be sold only in the Executive Lounge trim and comes fully loaded with a lot of equipment. Faux leather upholstery, a touchscreen infotainment system with an additional roof-mounted 13-inch screen with remote, smartphone connectivity, two sun roofs, cruise control, automatic climate control etc. are part of the standard fitment. All practical features. It even gets all LED lights, electric sliding rear doors, a three-zone climate control, ambient lighting, key-less entry with push-button start, electric tail-gate and much more. Apart from Android Auto and Apple CarPlay, both screens boast of Miracast, which helps in mirroring the phone’s screen. Part of the safety suite are seven airbags, front and rear parking sensors, a 360-degree camera, ABS with EBD, an electric parking brake with auto-hold function, the brand’s VDIM system, TPMS, immobilizer and an alarm.

From the comfy rear seat, we hopped onto the driver's seat to find out how it drives. And for our drive experience, we took the Vellfire out on TKM's test track near their plant in Bidadi. The moment we started the car, we realised we were about to drive one of the most silent MPVs yet. It gets a hybrid powertrain with a 2.5-litre four-cylinder petrol engine producing 115bhp and 198Nm of torque. This mill works in conjunction with two motors each for an axle, and transmission duties are done by an e-CVT gearbox. It's primarily a front-wheel drive car with one motor (105kW) and the engine delivering power to the front wheels. The other motor (50kW) for the rear axle drives the rear wheels only when required, making it a smart electric 4WD system.

Can the Vellfire be driven purely in EV mode? Yes, there’s a dedicated button too for it. But this can be done only if the battery is sufficiently charged on the run itself. Also, this is for the initial bit of starting and mostly it assists the engine when there’s minimal or no throttle input on the go. Otherwise, it will require the engine to provide the necessary push. And though it doesn't pack a punch, it's potent enough to push this almost three-tonne mammoth. It does have that pep right from the word go and should lug around a cabin full of occupants and luggage easily. Still need be, one can opt to put the gearbox in ‘S’ mode and use the six-steps on the CVT. Then, the self-charging hybrid means lower CO2 emissions, but its main advantage is that it's able to return a fuel efficiency of 16.35kmpl despite weighing 2,815kg. This is achieved thanks to Toyota's Hybrid Synergy Drive claiming 60 per cent of the driving time to be powered by the pure HV battery.

Despite the limited time and constraints around the track, the straights gave us an idea of how effortlessly the car pulls from standstill. It should be able to maintain good cruising speeds on our highways thanks to all the available power. At high speeds there's an apparent road noise that seeps in. However, all this while we didn't hear the engine which is quite silent. A couple of turns on the track gave us the idea that pushing the car too hard around bends will induce a lot of body roll. Otherwise, it shouldn't be uncomfortable even around some switchbacks at slower speeds. The steering is fairly light and provides a good feedback. Despite three-and-a-half turns lock-to-lock, it's quick and makes parking this huge vehicle an effortless task.

Now on to the ride bit, the Vellfire gets McPherson struts in the front and uses a double-wishbone rear suspension system instead of a torsion beam set up. Though firm, it's more pliant and does a good job of insulating the occupants and the road surface. This paired with stable handling has enabled it to provide a very comfortable ride which all prospective buyers will be vouching for.

The Toyota Vellfire will come as a CBU product and is expected to be priced in the range of Rs 85 lakh to Rs 90 lakh (ex-showroom). This puts it in the highly niche luxury MPV space where there’s the Mercedes-Benz V-Class, which by the way, is the only luxury MPV one can buy in India right now. Toyota’s brand image in India might not be perceived as high as Mercedes’ in India. However, the Vellfire can change this perception as it has a striking design, is spacious and gets a luxuriously appointed interior. It’s packed with many safety features as well and more importantly, the rear seats offer a very comfortable experience. Let’s not forget this MPV also comes with additional features and functions and a high level of technology too. We are sure it will win plaudits as a family MPV, a tourer and more with such versatility.

Is Vellfire a Good Car?

Based on 23 User Ratings

Vellfire has received a very favourable 88% approval rating based on 23 user reviews.

Users prefer to buy Vellfire for Comfort (88% rating) and Performance (84% rating). The least appreciated parameters are Mileage (79%) and Styling (79%).

How Vellfire fares against competition?

Toyota’s premium MPV, the Vellfire is available in a single variant in India. The luxury MPV is available in seven-seat configuration with captain seats for the middle row. The luxury MPV shares its underpinnings with the Toyota Alphard, therefore the vehicle has retained the large, boxy proportions, but with sportier detailing.

Further to this, read  Toyota Vellfire Road Test details by our expert.

The Vellfire MPV has a humongous length of 4,935mm, width of 1,850mm, height of 1,895mm and a wheelbase of 3,000mm; thereby offering ample space for the occupants.  The fascia gets generous amounts of chrome highlights all around the twin LED headlamp setup. The large front bumper features angular fog lamp housings. The Toyota MPV rides on 17-inch wheels with chrome to complete the bling effect. Unlike the front, the rear looks modest with sporty angular LED taillights that are connected by a heavy chrome slat. Interestingly, the Toyota logo gets a blue accent to signify its hybrid nature.

Toyota Vellfire gets a three-row seating layout with captain seats in the middle row. The MPV gets powered front and second row, touchscreen infotainment system with Apple CarPlay and Android Auto and three-zone climate control. The Vellfire gets colour coordinated premium leather upholstery, power sliding side door and power back door. It offers 16-colour roof ambient illumination, VIP spotlight with welcome function, sunblinds in second and third row and more. Additionally, the Vellfire gets rear ceiling screen with HDMI and WiFi, 17-speaker JBL system and EMV Audio with in-built NAVI.

Toyota Vellfire is a 7 seater car with 5 doors.
Yes. Sunroof is available in 1 Vellfire versions. 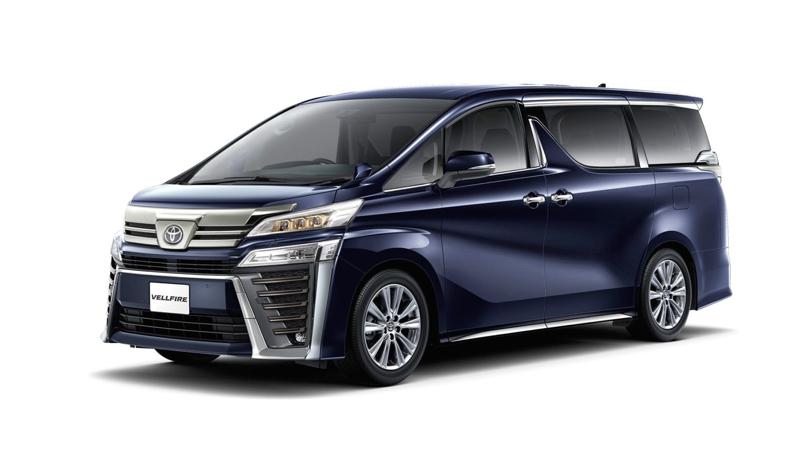 &nbsp; Toyota has introduced two new initiatives as part of its goal to enhance the purchase process in the COVID-19 era- Flexible EMI option and Toyota Official Whatsapp. Toyota service