The new Kia EV6, a SUV from Kia, was launched in India in Jun 2022. EV6 has received 95% rating score from our users. EV6 is preferred for its styling and comfort.

EV6 is available in 2 versions and 1 fuel options - Electric. 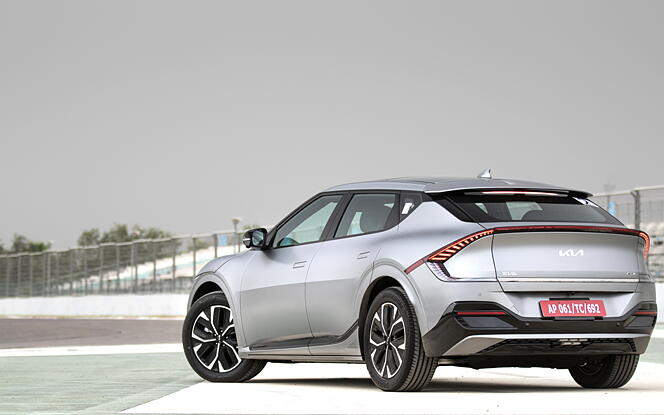 Launched in 2021, the EV6 is Kia’s first dedicated battery electric vehicle. It’s underpinned by Hyundai’s E-GMP platform and is the first in a line of EVs over the next few years for the South Korean automaker. It’s fast, fun to drive, unique to look at and of course, has all the required green credentials. However, the rear seat experience is average with not enough features or even accessories. In the larger scheme of things, if this is the benchmark set by Kia ahead of its first locally produced EV in 2025, then the future looks good.

The first thing that catches your attention when you look at the EV6 is its silhouette. Some have termed it as a large hatchback. However, we think it’s more of a low slung crossover. Upfront, you get Kia’s signature Tiger nose grille along with these full LED headlamps and a significant bulge on the bonnet.

In profile, you can see the crossover stance as well as those massive 19-inch wheels. Also visible are these flared wheel arches and pop-out door handles. Auto enthusiasts will recognise the shape of the rear spoiler as being inspired by the legendary Lancia Stratos sports car. Other highlights here include this chrome strip above the number plate slot as well as this black cladding that adds a visual break to the rear design.

Inside, you get an all-black cabin with suede upholstery and vegan leather bolstering of which the former is not visible in the shots but will be offered on the customer vehicles. The cabin will look and feel familiar as one from the Kia stables and that’s a good thing as it will aid in bringing first-time buyers and Kia loyalists over to the electric side without much effort.

Upfront, the dashboard is dominated by two massive digital screens with the one on the left for the infotainment system while the one on the right is a fully digital instrument cluster. Like the cabin, the interface on both screens is familiar and relatively easy to use. From the driver’s seat, the infotainment system is easy to reach and very visible in the bright sun that we experienced at the circuit during our shoot.

What’s new, however, is the large two-spoke leather-wrapped steering wheel loaded with a plethora of buttons controlling various functions across the car. Equally new and nice to look at is the island-like centre console with a large storage space sitting like a basement below. The centre stack leans ever so slightly towards the driver and has nice textured elements all over to give it a premium appeal.

The suede has been carried over for the second row with this nice sporty pattern stitched into the middle of the seats. Where there is so much excitement in the first row, the second row feels a bit basic with just AC vents, door pockets, and a central armrest with cup holders as the major highlights. The floor is flat but the seat base is low and thus thigh support is lacking especially if you are on the taller side of things. The rear seats can be folded down in a 60:40 split configuration for additional boot space. The loading appears high in terms of appearance but the boot is actually easy to access due to the car’s low stance.

Kia has also introduced an ADAS suite, the likes of which include lane keep assist, blind-spot detection, lane follow assist, smart cruise control and safe exit assist. Lastly, the EV6, as expected, gets its version of Kia Connect with all the usual features but also a few specific to it being an EV.

The EV6 here will be offered with a 77.4kWh lithium-ion battery pack mated to an electric motor that in RWD guise produces 22bhp and 350Nm while in the AWD guise produces a significantly higher 323bhp and 605Nm. Adding to these numbers is a 0-80 per cent charge time of just 18 minutes when connected to a 350kWh DC fast charger while a 50kWh DC fast charger will bring you from 0-80 per cent in 73 minutes.

Of course, Kia will offer an emergency wall charger as well as a wall box home charger that can be installed at a location of the customer’s choice that matches the requirements needed to install it.

Out on the race track, the Kia EV6 right off the bat was fast and fun to drive with the headlines being a 0-100kmph time of 5.2 seconds for the AWD model and 7.3 seconds for the RWD model. We got to test this out on the back straight and it was a proper push back in your seat experience when we put the pedal to the metal with the car hitting its electronically limited top speed of 194kmph well before the 150-metres board for T5 on the track. In fact, it was so addictive that I had another go on my second hot lap and would have tried it again if I had got more laps.

As a car to drive the EV6 felt intuitive and fun thanks to the way it provided feedback. The connection between the steering and wheels was linear and precise and with that much motivation on tap, there was more than enough capability to get the car to slide while tackling the turns. In fact, in sport mode and with a facility like the BIC, the EV6 didn’t feel like a car weighed down by heavy batteries and in fact, felt playful and egged you on to push it harder. Consequently, at low speeds, the steering felt light and easy to use and only required two turns to go from lock to lock.

What we found slightly lacking were the brakes and felt that they could have done with more initial bite. However, given the heavy nature of track driving across multiple batches of journalists, it’s also possible that the brakes had undergone above normal wear and tear.

On the cool-down lap and once I had got my breath back, we tested out the normal and eco modes and could feel a noticeable difference in the response of the throttle, especially under heavy acceleration. The four-stage re-gen was also very effective to the point that at the highest setting you could drive the car with just one pedal. These are of course initial impressions of the Kia EV6 and we will be able to give you the full low down on this electric vehicle once we put it through CarTrade’s real-world performance and range tests.

The Kia EV6 will be offered in two guises, RWD and AWD, with different power outputs. There are five colour options and one GT line trim level being offered for the Indian car market. Bookings open from 26 May, 2022 and a price announcement on 2 June. Only 100 units via the CBU route will be sold in the first round.

EV6 has received a very favourable 95% approval rating based on 4 user reviews.

How EV6 fares against competition?

Find a list of all 2 electric versions of Kia EV6. This table includes Kia EV6 on-road price which covers all costs like RTO and Insurance.

Kia has launched its first pure electric vehicle, the EV6 in the country. Available in GT-Line RWD and GT-Line AWD variants, the EV6 claims an electric range of 528km and comes to India via the CBU route.

In terms of exterior styling, the Kia EV6 fascia features the new ‘Opposites United’ design philosophy with LED headlamps and integrated DRLs with sequential turn indicators. The EV6 has a sloping roofline and a striking rear profile with full length LED tail lamps across the boot.

Inside, the EV6’s cabin is an all-black affair with a dual-screen atop the dashboard. Other highlights include a two-spoke steering wheel, an electric sunroof, a 14-speaker Meridian stereo system, and ADAS functions.

The Kia EV6 draws its power from a 77.4kWh battery pack and is offered in two states of tune – rear-wheel-drive and all-wheel-drive. While the former puts out 223bhp and 350Nm torque, the latter churns out a healthier 320.5bhp and 605Nm of torque. Both the versions have a claimed electric range of 528km and are coupled with an automatic transmission.

The on-road price of the Kia EV6 in Delhi starts at ₹ 60.95 Lakh for the electric engine. Meanwhile, the top end model (EV6 GT Line AWD) with electric engine is priced at ₹ 65.95 Lakh.
Kia EV6 runs 708 km in a single charge.
Kia EV6 is a 5 seater car with 5 doors.
Kia offers battery warranty for first 160000 km with all offered 2 versions. However, warranty expires after 8 years even if km is not achieved.
Considering ₹5/unit to be the electricity cost, it generally cost around ₹1 to ₹1.5 per km to drive an electric car.
Kia EV6 is available in 5 colours - Moonscape, Snow White Pearl, Runway Red, Aurora Black Pearl, Yacht Blue
There are 6 Kia EV6 showrooms in Mumbai. Check showrooms in your .
EV6 is available in 2 Electric variants. EV6 Electric Automatic variant price is ₹ 60.95 Lakh to ₹ 65.95 Lakh.

The Electric version comes with 77.4kWh battery and generates power. It can drive 708Km on full charge. Kia India hikes prices by up to Rs 1 lakh

Last month, Kia had announced that it would increase prices across the model range from January 2023. We have now got our hands on the updated prices of all Kia models, where the quantum of the price rise goes all the way up to Rs 1 lakh. The Kia EV6 is available in two variants.