Jitendras Romantic Association With His Audi A8

Jitendra, one of the most successful romantic actors from yesteryears, has been active in the Indian Film Industry for last 55 years. The man commands a huge fan following for his dancing as well as acting skills. After bidding adieu to his movie career, Jitendra diversified his interest in other fields like production, reality shows, and television series. Apart from this, he is also known for his exclusive taste for special rides and set of wheels. 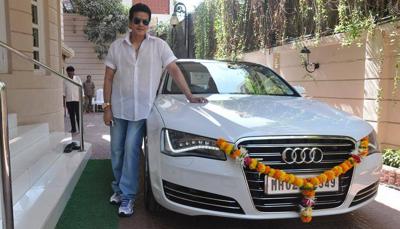 Jitendras romantic association with his audi a8

Despite a diversified fleet of vehicles, Jitendra holds a special association with his Audi A8. One of the most stunning Audi cars in India, it is known for its jaw-dropping design, style, and finish. The car is beauty personified with Audi’s signatory built that consists of an extended wheelbase, daytime running LED headlights, highly advanced gadgetry, efficient die sel mills known for delivering athletic performance and handling.  In India, it is available in three trims whose pricing brackets between Rs.55.80 lakhs to Rs.138 crores.

Beneath the hood, it is incorporated with a 3.0-litre diesel engine that bestows this premium sedan with an exception fuel efficiency of 18mpg. Despite its size and built, Audi A8 smoothly sprints from 0-100kmph in 4.0 seconds. In terms of driving and handling experience, Audi A8 stands out for offering a influential and smooth experience. Its deft handling is supported by its air suspension system, dynamic rear sport steering, Drive select feature, adaptive dampers, and so forth.

The braking and safety aspect is taken care by its superior quality brakes that stabilize cars on all speed levels. The airbags package consists of dual front, front knee, rear curtain, and full-size airbags. Other important features include active lane assist technology, pre-sense feature, and so many others. In crux, Audi A8 is one of the lavish Audi cars embedded with most advanced features and intelligent technologies.