We all know about scores of celebrities who have a fetish for luxury car models from the biggest brands around the globe. Often these chic cars become a status symbol and such celebrities do not budge an inch when it comes to buying state-of-the-art models. When it comes to tinsel town celebrities, the buzz is all the more. Be it glamour, posh brands, chic cars, Bollywood celebrity cars have it all. The case is not at all different with the Bollywood’s new poster boy, Varun Dhawan of the Main Tera Hero and Student of the Year fame. This celebrity had expressed his love and desire for Audi cars on social media a couple of times. Recently, this film star was spotted with his all-new luxury Audi Q7, justifying his love for the German manufacturer. 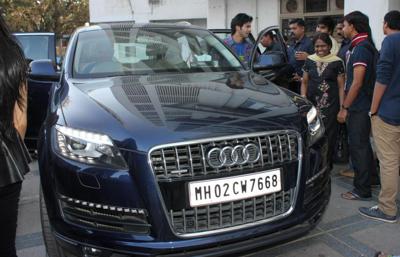 Audi cars have changed the face of cars from the time it has found a place in the Indian market. Be it in the section of sedans or SUV in India, Audi has taken the competition to a whole new level. Audi car dealers in India have reported their viewpoint and said it has become one of the most sold brands in India. Audi is a clear favourite for those people who are looking for luxury cars, be it in the suave sedan segment or the sporty SUV in India.

When it comes to Audi cars, the Q7 has made a strong statement in the world of SUVs. It is a crossover SUV with imposing looks and a high performance. It has been in the global market since 2006 and has been one of the favourite models for celebrities around the world. Even till 2014, Audi Q7 is among the best-selling models of this brand and is still going strong. A number of modifications and new generations cars have also been released, which has made the base model only better.

Audi Q7 4.2 TDI Quattro is powered by a 4134 cc engine, with eight V-shaped cylinders. The roaring model is capable of producing 335.2 bhp of power with a peak torque of 800 Nm together mated with a tiptronic transmission and 8-speed gearbox. The time required for zooming to 100 kilometres per hour from ignition is 6.4 seconds with a maximum speed of 242 kilometres per hour. Having a seating capacity of seven people, this model has changed the face of SUV in India. All modern amenities and technology have been installed in this model, thus giving a never-before driving experience. Undoubtedly, the Bollywood celebrity has scores of reasons to go for this model.

Test Drive The Car Before Purchase