Glanza [2019-2022] competes with Toyota Glanza, Maruti Suzuki Baleno and Hyundai i20 in India. Toyota Glanza has been discontinued in 2022. We are showing the last known price for Glanza.

With the intent of biting into the lucrative premium-hatchback segment without having to gnaw into its resources, Toyota smartly introduced the Glanza which is essentially a rebadged Maruti Baleno. The Glanza even rolls off the same Maruti factory production line as its twin. Besides that, Toyota has kept things simple by selling the Glanza with two petrol engines along with the option of a manual and an automatic gearbox (two variants only). We’ve driven Glanza’s CVT version extensively for this review, and here’s our detailed experience.

Apart from the grille and logo, there’s nothing to distinguish Toyota Glanza from the Baleno. And since the latter has the looks department covered, so does its clone. Admittedly, I’ve always ogled at this design’s bloated stance which shouts more SUV. I mean, just think about it, a tall Glanza with larger wheels. Yummy! But until then, you’ll just have relish over the current one that takes pride in its rather large proportions, the prodigious bulges that flow onto the crisp headlamps, those sharp two-tone alloys, and the heaps of chrome highlights.

Same wine here. And, why shouldn’t that be? It doesn’t make sense to fiddle with something that works well. Especially when it’s a comfortable, spacious, and practical cabin. One that’s covered entirely in black materials, save for some blue upholstery and silver trim on the dash/door pads. Be that as it may, fit and finish are at par with segment expectations, plus, the large touchscreen system with the adjoining array of buttons adds a heightened sense of delight. Yet, if I’m to nit-pick, any sort of digital instrumentation should have replaced the boring analog dials here.

Also, in addition to the storage space in the glove-box and under the driver’s armrest, there are compartmentalised stowage sections in the centre console and door pads which can satisfy most requirements. Next up, as a result of the aptly cushioned seats all around that are large and supportive, spending extended periods in them is indeed pleasant. Especially with the generous leg- and head-room. What’s more, the 60:40 split-folding feature may certainly help boost practicality, but it also takes a hit because of the challenges involved to lift and load heavy luggage through the narrow access of the boot’s 339-litre enclosure, which also sits tall off the ground.

The Glanza gets two BS6 1.2-litre petrol engine options; one being an 89bhp/113Nm DualJet (mild-hybrid setup) with only a five-speed manual transmission, and the standard 82bhp/113Nm K12B mill that’s also available with a CVT automatic transmission, which is what we have for this write-up. As with most Jap petrols, this one too is a refined unit.

Getting off-the-mark is as simple as slotting into ‘D’ and letting go of the brakes, wherein, this hatch moves ahead decisively and silently. Owing to the ample low-end grunt on tap, there’s enough oomph to allow the Glanza to effortlessly potter around the city, including the usual stop-go traffic. But even when given the stick, this CVT’s rubber-band effect is surprisingly not as pronounced as some of the others.

We eventually learned that the system promptly gauges the throttle inputs to reciprocate the response. Which, as a user, means there’s not much lag for the motor to respond, even on the highway. This trait intensifies once the ‘Sport’ button is nudged on the gear shifter, wherein, higher revs are held at the same corresponding throttle inputs for improved responses. The result? The motor is more eager than ever, with the 0-100kmph sprint taking just over 13 seconds.

Meanwhile, the drivability runs of 20-80kmph and 40-100kmph (a test of overtaking capabilities) come up in a fairly reasonable 7.46 and 9.92 seconds. And it’s only while racing past the 3,000rpm mark that the engine gets vocal despite the sublime cabin insulation. As for the fuel efficiency, this petrol-CVT Glanza returned 16.19kmpl in the city and 18.76kmpl on the highway.

Concerning the ride, the Glanza’s suspension does well to prevent occupant discomfort by soaking up most bumps, undulations, and irregularities, regardless of the speed. And at highway speeds, the Glanza feels stable as it imparts the kind of poise which is usually seen in cars a segment or two higher. But at the same time, some suspension noise filters into the cabin but isn’t a cause for worry though.

Given the absorbent nature of the shocks, this isn’t the corner carver like the VW Polo for instance. But unexpectedly, despite the mild body roll, the Glanza isn’t scary to drive enthusiastically around bends. This has more to do with its light steering, which although feels ever-so vague off the dead-centre, is fairly direct overall. By large, this is fine by family car standards. But on a more serious note, the brakes could do with more initial bite.

After spending some quality time with the Toyota Glanza CVT, it comes across as a premium hatchback that’s priced between Rs 9.89 and Rs 10.76 lakh (OTR Mumbai). It’s also reasonably practical, has a comfortable cabin that’s spacious and loaded with features, and is dynamically sound. Nonetheless, is the Glanza a better deal over the Baleno? Well, it’s hard to ignore Glanza’s attractive three-year/one lakh kilometre warranty, over Baleno's two-year/40,000km. Plus, Toyotas also benefit from a solid reputation along with a strong service network. If these extras mean everything to you, the Glanza is the one to opt for.

Find a list of all 5 petrol versions of Toyota Glanza [2019-2022]. This table includes on-road price which covers all costs like RTO and Insurance.

Toyota Glanza is the first product to be introduced under the Toyota-Suzuki joint venture agreement. The Glanza is available in two variants – G and V in four trims - G MT, V MT, G CVT, and V CVT. The hatchback is available in five colours - red, blue, silver, white and grey. The new model is essentially a rebadged version of Maruti Suzuki Baleno and is based on the top-spec Zeta and Alpha variants.

Toyota Glanza shares the body-shell with the Baleno and hence has retained most of the design details except for a revised grille and Toyota badging on the front and rear. The Glanza gets LED headlamps and LED taillights. The vehicle rides on 16-inch alloy wheels.

As for the interior, the Glanza gets a seven-inch touchscreen infotainment system with Apple CarPlay and Android Auto. The vehicle gets manual driver height adjustment, automatic AC, 60:40 split rear seat and keyless entry. Additionally, the vehicle also gets rear parking camera along with a follow-me-home headlamp feature. Toyota Kirloskar Motor (TKM) will hike prices across its model range in India next month. The increase in prices has been attributed to higher input costs. 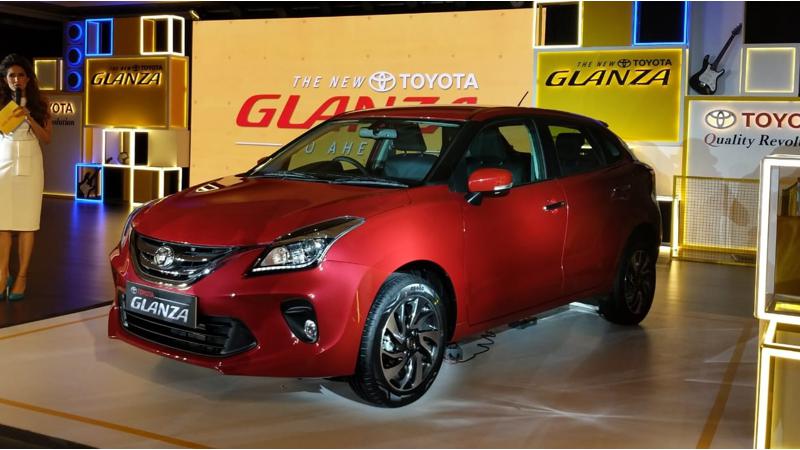 Toyota Glanza A few Toyota India dealers are offering huge discounts for the month of December 2019. These benefits are offered in the form of cash discounts, exchange bonus and corporate

Toyota-Glanza Back in March 2018, Suzuki and Toyota had entered into an agreement for a mutual supply of hybrid and other vehicles. Toyota Glanza, essentially the Baleno hatchback is the first