Golf enthusiasts in Delhi and National Capital Region can win the hole-in-one challenge at the 8th hole of the DLF Golf and Country Club, Gurgaon every Saturday up to 3 pm until the end of June 2009 and drive home in the new BMW 3 Series. 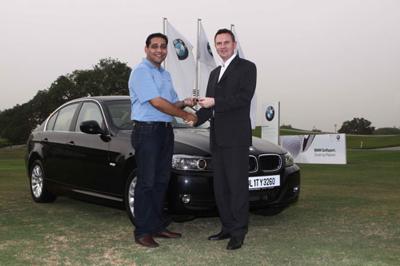 Mr. Peter Kronschnabl, President BMW India said, “Scoring a hole-in-one is no easy feat for pros, let alone amateur golfers. It is our pleasure to hand over the new BMW 320i to Mr. Kapoor. His success is demonstrative of the quality of amateur golfers in India and his win reflects on the status the game enjoys in the country.”

Kapil Kapoor (31) works in the Sales & Marketing department of a leading telecom operator in India. He lives in Delhi, has been married for more than 3 years and has a 9 month old son. “Playing golf is a true passion of mine, and it is an honour to win the new BMW 3 Series just by doing something I enjoy,” said Mr. Kapoor.

Launched in January 2009, the new BMW 3 Series is produced at the BMW Plant Chennai and is one of the most successful car models from the BMW portfolio. The BMW 3 Series is available in petrol (BMW 320i, BMW 325i) and diesel variants (BMW 320d and BMW 320d Highline). More power, more agility, more style. The new BMW 3 Series sets the benchmark in performance and dynamics. Its refined lines, sporty exterior and leading technology define the world’s first sports sedan as a commanding BMW innovation.

The Première series of the BMW Golf Cup International is an amateur golf tournament series designed for customers, prospects and opinion leaders and provides the right mix for an exclusive social interaction. Held in India across five cities – Chennai, Bangalore, Pune Mumbai and Delhi, the tournament was organized by BMW India Dealerships, with the national final occurring on in the National Capital Region (Gurgaon) at the DLF Golf & Country Club. The National Winners from India participated in the International world finals in Buenos Aires, Argentina.