Mahindra is coming back to the premium segment with the Alturas G4. It’s a big SUV and is actually the G4 Ssangyong Rexton but with Mahindra badging for the Indian car market. There’s two variants, diesel power only, five colour options and it will be sold through a separate premium section of the Mahindra showrooms after it is launched tomorrow. 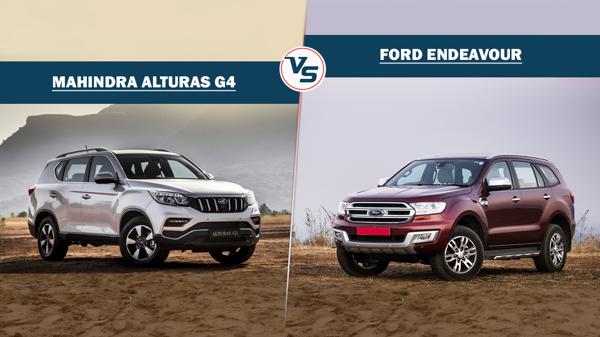 One of the Alturas’ biggest rival is the Ford Endeavour as it embodies roughly the same concept and is in the same price bracket as the Alturas. Well, here is how the Endeavour matches up to the Alturas in terms of features and specifications.

Exterior
The primary criteria for this segment is the big and boxy look associated with ladder-on-frame SUVs and both these vehicles match the requirements in that regard. The fight then, is down to the individual elements present on both vehicles.
Where the Alturas has rounded lines, the Endeavour is boxy. Highlights of the Alturas design include the Mahindra grille, LED headlamps, the five spoke alloy wheels and the shape of the tail lamps. Top design features of the Endeavour include the silver coloured bash plate elements in the front and rear, design of the alloy wheels and significant amount of chrome. There is also the fact that the Endeavour sits a bit high above its wheels giving the car a rugged look.

Interior
The price bracket that these vehicles exist in means they get a lot of features as standard. This list includes leather upholstery, touchscreen infotainment system, multi-zone climate control, power driver’s seat, split folding second row and folding function for row 3. The Alturas beats the Endeavour in the second row dimensions across all measurements but it’s the other way around with row 3 for both the cars. However, the Endeavour has one major trick up its sleeve which is that it has an auto park function. This is very useful for a vehicle of this size but is only offered with the top of the line 3.2 4X4 AT model.

Engine and gearbox
The Mahindra Alturas G4 is offered with a 2.2-litre diesel that produces 178bhp/420Nm. It can be had in 2WD or 4WD guise and there is only a seven-speed AT on offer. The Endeavour can be had with a 2.2-litre diesel producing 158bhp/385Nm or a 3.2-litre diesel producing 197bhp/470Nm. Both are only offered with a six-speed AT and the latter can only be had with AWD.
Both the Alturas and the Endeavour get locking differentials, a low range gearbox and of course, AWD as a part of the off-roading package.

Conclusion
We have said this quite a bit. The Mahindra Alturas has what it takes to GO up against the Ford Endeavour but Mahindra has to price it correctly and offer reliable after sales experience for its customers with regard to this car.