Skoda India is ready to bring Yeti to India. The model was launched earlier this year in March at the Geneva Motor Show. The company has already started mass production of its Hatchback SUV crossover model and it is expected to be launched in India by January 2010. The first SUV model of Skoda Yeti rolled out from the Kvasiny plant in Czech Republic on 13 May. 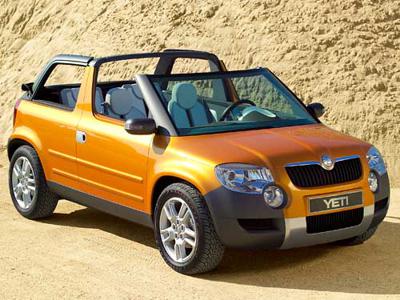 The Indian model of Skoda Yeti will have both front wheel and 4W driver versions when it is finally launched in India. The introductory price of the new Indian model is expected around Rs. 10-11 lakh. Currently there are no models in India that fall in the category of pseudo-SUVs or crossover models. The India version will be available in petrol as well as diesel models. Skoda definitely plans to bring its 2.0 litre TDI diesel model to India for sure.

The New Yeti hatchback SUV crossover model has been built on 2578mm wheelbase, with length – 4233mm, width – 1793mm and height – 1691mm, and can easily make room for luggage compartment of as much as 1,760 litres. Skoda aims to bring turbocharged versions of Yeti for greater performance and responsiveness.