Shah Rukh Khan, the world-renowned actor and heartthrob of many Indians, is taking his role in the upcoming movie 'Chennai Express' quite seriously and is using a bike for commuting to sets on a daily basis. The shooting is currently undergoing at Wai and sources suggest that 'King Khan' prefers his bike, whereas the majority of film unit drives their cars in order to reach the set that is spread across 20 acres of area. The star was also seen riding the classy Royal Enfield Bullet Battle Green in his previous blockbuster movie- Jab Tak Hai Jaan. It seems that King Khan has developed a bike love lately. 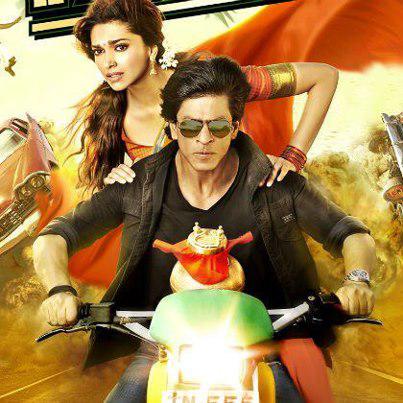 Chennai Express is being directed by the 'Golmaal' director Rohit Shetty and is a big budget romantic comedy movie. Partnering Shah Rukh is Deepika Padukone as the female lead, which is their second movie as lead pair after the 2007 blockbuster Om Shanti Om. Further, Shah Rukh's home production banner headed by wife Gauri Khan, Red Chillies Entertainment is producing Chennai Express. The movie's poster features King Khan riding a bike with saree-clad Deepika on the pillion seat, in what possibly is a chase sequence with people and cars flying in the background.

The acclaimed actor has a well publicised penchant for high end sports and luxury cars, including many BMWs, Bentleys and a Rolls-Royce. Shah Rukh has an extremely well decorated garage of super cars with most distinguished model being the Rolls-Royce Phantom Drophead Coupe. Further, the actor also has BMW 7 Series, 6 Series and Audi A6 premium saloons, along with few luxury Sports Utility Vehicles (SUVs) like Mitsubishi Pajero Sport and Toyota Land Cruiser.

General Motors still waiting for the right strategy in India