Maruti Suzuki India limited, the country’s largest passenger car maker, looks all set to introduce the facelift model of its SX4 mid size sedan in the auto market anytime soon. Reportedly, the model has been spotted a number of times performing test runs on the Indian turf. On the launch of this refreshed model, industry experts are of a view that the auto maker has provided few cosmetic changes to the current generation model of SX4 and will offer few additional engine options. Sources close to the development process revealed that the auto maker is planning to introduce 10 engine options with its upcoming model, comprising five petrol, four diesel and one CNG. 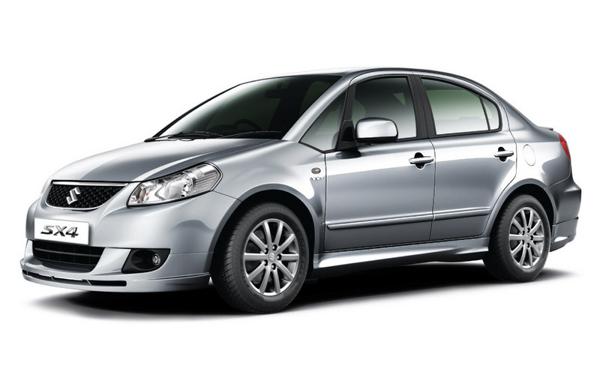 On the exteriors front, the reworked SX4 is expected to feature a new grille, coupled with redesigned head lights, bumper and oval fog lamp. In zeal to offer a sporty look to the model, a heavy chrome treatment has been provided to the front grille of the 2013 SX4, which is expected to lure the attention of Indian auto aficionados across its stand. The top end variants of SX4 are also anticipated to come equipped with integrated turn indicators on outer rear view mirrors. Coming to the rear end of the upcoming model, sources revealed that the no major upgrades can be spotted and is kept almost identical to the ongoing model.

The interiors of the new SX4 will sport new advancements, which will surely add to the comforts and convenience of its passengers. Additional features like new comfortable upholstery, GPS navigation system and efficient air conditioning system are some of the key highlights of the same. The top of the series models of upcoming SX4 are expected to be incorporated with a number of safety features, which will ensure a complete safety of its passengers. Advancements like Anti-lock Braking System (ABS), Electronic Break-force Distribution (EBD) and dual airbags are anticipated to be a part of the standard accessory in top end model of the next generation SX4.

On the technical front, the upcoming facelift model of SX4 is expected to feature a number of engine options; however nothing is confirmed as of now. But auto analysts said that the current generation engine will be surely packed within the upcoming model, which happens to be 1.6 litre petrol and 1.3 litre diesel engine options. The former churns out a maximum power of 105 bhp with highest torque of 145 Nm, whereas the oil burner produces 90 bhp, along with a peak torque of 200 Nm. Post launch, the upcoming model is expected to compete against the likes of Hyundai Verna, Volkswagen Vento and Skoda Rapid, among others.