The London premiere of the much awaited superhero flick, The Wolverine, was held at the Leicester Square on 16th July. Slated to release on the 25th of July, the movie will star Hugh Jackman in the lead role. The film has been directed by James Magnold, who was also present at the event. The London premiere was a star-studded event that saw the presence of many Hollywood hot shots. Fans in high numbers came from all over the world to see their favourite action hero. 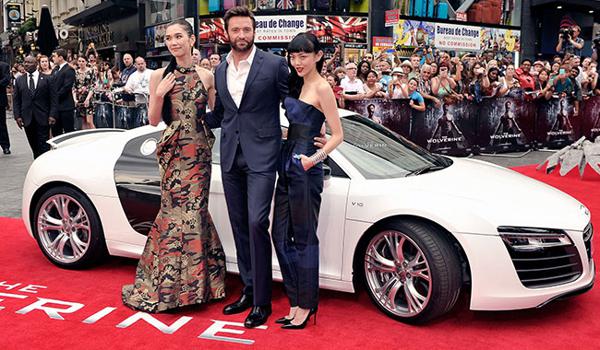 This premiere also had a fleet of chauffeur driven Audi R8 cars, which were present at the venue to escort guests to the top of the red carpet. Hugh Jackman, the star of the proceedings, also came to the venue in an Audi R8, making a grand entrance and posing for a photograph with actors Rila Fukushima and Tao Okamoto. Apart from the Audi R8, other vehicles were also present at the venue, such as Audi A8L and Ducati Diavel. In the film, the character Yuko, played by Rila Fukushima, drives Wolverine (Jackman) in an Audi R8 Spyder.

This film is going to be the sixth instalment of the X-Men series and is related to events of the X Men: The Last Stand, which was released in 2006. Hugh Jackman has received worldwide acclaim for his portrayal of the Marvel Comics superhero. The plot of this upcoming film is based in Japan, where Wolverine battles samurai steel. Jackman had to bulk-up a lot for this film and explained how he took help of wrestler Dwayne Johnson 'The Rock'. “I lost a lot of weight after Les Miserables and I asked him what to do, and he gave me his diet. Let me tell you, it was brutal - and I only did half of it,” Jackman said. Hugh Jackman also featured in the much acclaimed film Les Miserables (2012), which won several awards including the Academy Award, BAFTA and Golden Globe Award.

Compact MPV: An emerging segment of the Indian car market