General Motors to Sail Through Tough Times in India

General Motors announced that it will sail through the choppy waters. The current crisis in North America will not affect local vendors in India. The company intends to source $1 billion worth auto components from India. It has already sourced auto components worth $500 million from Indian vendors and the rest of it will be sourced by 2010. 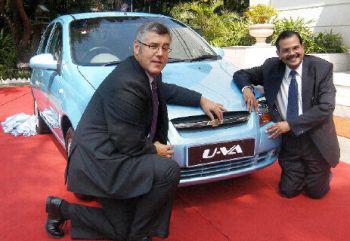 General Motors also launched its Chevrolet U-VA in Bangalore on Friday. Mr Karl Slym, President and Managing Director, GM India, and Mr P. Balendran, Vice-President graced the occasion as Chevrolet U-VA marked its entry in South India. The company also plans to launch two to three new models in India by the year 2009. These will be the all-four wheel drive Captiva, Chevrolet Cruz and a mini-car that will be included in the GM product portfolio in India.

Slym told the reporters that there will be no job cuts in the company. GM intends to increase its head count further by appointing nearly 500 more employees in different divisions. The Bangalore centre has a staff of 1600 and 100 of them are engaged in R&D. The new employees will be appointed for its Halol and Talegaon plants.

Honda Plans to Launch Its Super Bikes in India