The much awaited Honda CR-V Hybrid has been spotted in flesh at the Frankfurt Motor Show 2017. The Hybrid version gets most of the style elements from the new CR-V, however it is expected to get a few more feature upgrades over the regular one at the time of its launch. The Honda CR-V Hybrid will be launched in UK sometime in 2018. 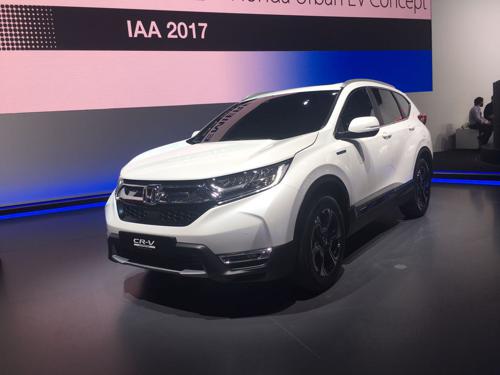 Under the hood, the Honda CR-V Hybrid gets an all-new Intelligent Multi Mode Drive (i-MMD) two-motor hybrid setup, which includes an electric motor and a 2.0-litre petrol engine, plus a separate electric motor generator. Moreover, reports indicate that the new system disposes a conventional gearbox in place of a single-fixed gear ratio. Interestingly, the system is capable of shuffling between three driving modes depending on driving conditions.

Apart from the CR-V Hybrid, Honda also showcased the European-spec CR- V that will be available with a 1.5-litre VTEC turbo petrol mated to either a six-speed manual gearbox or a CVT transmission. As for now, there ae no plans for diesel option in European markets.