Ford and Honda Slash Prices on their Bigger Models

The government has announced excise duty cut on car with engine capacity of more than 2000cc. Most of the auto manufacturers have decided to pass on the full benefit to their customers and Ford is not far behind. ”The additional duty reduction has been a welcome step taken by the Government though the reduction is limited only to large cars. We are pleased to pass the benefit of the reduction on the Endeavour to the consumer in entirety,” said Tim Trucker, Vice President (Sales), Ford India. 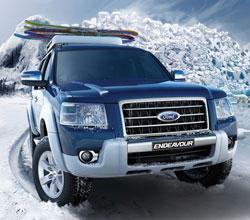 Ford has reduced priced of its model Endeavour by Rs. 6000 which is applicable on its all three variants. The base model (2.5 Litre) of the Endeavour will now be available at Rs. 15, 01,000 (Ex-showroom, New Delhi). The Ford Endeavour is available in two other variants – the 2.5L XLT and the 3.0L Thunder Plus.

Similarly, Honda which has earlier stated that it will not reduce the prices has now announced that it will also cut prices of some of its models by up to Rs. 6000. Honda CR-V and Honda Accord are now cheaper by Rs. 5000 in India. Honda Accord is now available between Rs. 17.72 lakh and Rs. 24.80 lakh. Honda CR-V is now available between a price range of Rs 22.92-Rs 23.62 lakh.

Hyundai to Relocate its Production Plant