Chevrolet's legendary badge, popularly known as the bowtie, completes 100 years in 2013. Introduced in 1913 by William C. Durant (co-founder of the company), the bowtie was first used on the H-2 Royal Mail and H-4 Baby Grand models. However, the origin of the Chevrolet's iconic bowtie has still can not be determined. There are a lot of theories explaining the origin of the Chevrolet emblem, but none of them have been stated as the exact one. 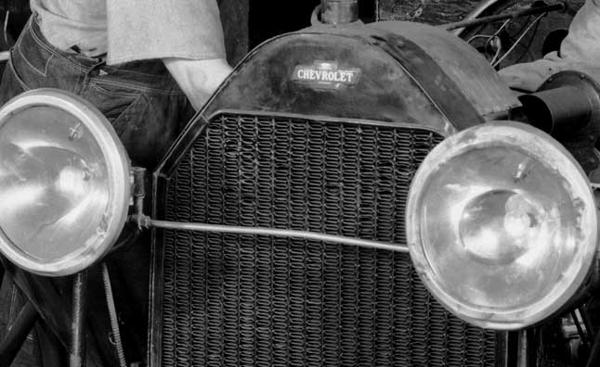 William C. Durant, the makers of bowtie moniker, had his own story behind the creation of this logo. As per Durant, the bowtie took inspiration from the wallpaper design that he saw in a French hotel. The Chevrolet Story of 1961, a publication that celebrated the 50th anniversary of the company, mentions its origin. As per the publication, “It originated in Durant’s imagination when, as a world traveller in 1908, he saw the pattern marching off into infinity as a design on wallpaper in a French hotel. He tore off a piece of the wallpaper and kept it to show friends, with the thought that it would make a good nameplate for a car.”

Despite being an official publication, numerous contradictory stories emerged, thereby casting doubts over its authenticity. Surprisingly, two of those stories came from William Durant's family members, his daughter Margery and wife Catherine. Margery Durant published a book in 1929 that was dedicated to William Durant, titled 'My Father'. The book explains several incidents when William Durant, sitting on the dinner table, used to doodle nameplate designs on paper. “I think it was between the soup and the fried chicken one night that he sketched out the design that is used on the Chevrolet car to this day,” the book says.

In a stark contradiction to the versions of William Durant and his daughter Margery, a different story was published in the Chevrolet Pro Management Magazine. A 1986 issue of the magazine printed an old interview of Catherine, wife of William Durant, in which she recollected the time when the couple was holidaying in Hot Springs, Virginia. According to an incident, she recalled how her husband spotted a sign in a newspaper ad, in reference to which he said, “I think this would be a very good emblem for the Chevrolet.”

This incident triggered a detailed research into the matter by Ken Kaufmann, a historian and the editor of The Chevrolet Review. On looking into it, he found out that an edition of The Constitution had an advertisement of Coalettes, a refined fuel product for fires, which had a similar logo to Chevrolet's bowtie. Till date, no story regarding the origin of the bowtie has been accepted as the true one by all. However, despite the controversy over its origin, Chevrolet's iconic logo has gone on to become one of the most iconic emblems in the world.