The 10th edition of the Royal Enfield Himalayan Odyssey, a non-competitive adventure bike riding event, was kicked off on June 22, 2013 from India Gate, New Delhi. As many as 100 Royal Enfield riders from India and abroad are participating in the event, which is highly respected by the global bike community. The 10th chapter of the Royal Enfield Himalayan Odyssey will see bike riders travelling to the world's highest motorable pass- Khardung La that is situated over 18,365 feet above sea level. As per reports, two separate rider groups on Royal Enfield motorcycles have left Delhi and would soon meet in Leh. The trip is scheduled to end on July 8, 2013, when the procession of Royal Enfield riders returns to the National Capital. 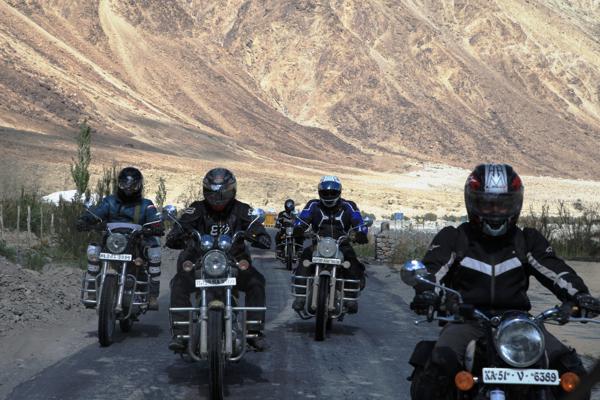 The 10th Royal Enfield Himalayan Odyssey was flagged off in style by Shaji Koshy, the Senior Vice President (VP), Sales and Marketing at Royal Enfield India. Visibly delighted at the kick off, Koshy was quoted as saying, “The Royal Enfield Himalayan Odyssey is the ultimate motorcycling adventure that unites the rider with the bike and the terrain to create an experience of a lifetime. It is this love of pure unadulterated motorcycling that brings the riders together from all over the world and bond over their common passion of riding on a Royal Enfield to the Himalayas. In our 10th year now, this ride has only become bigger and better with a record number of 100 riders riding together to Ladakh on their Royal Enfields.”

The strong contingent of 100 Royal Enfield Bullet riders had gathered from across the country. The enthusiasm among them was sky high and few had arrived from small Indian cities and towns, such as Bareily, Vizag and Kannur. Their bike riding skills will be tested by the immensely demanding off-roading terrains of Parwanoo, Keylong, Narkhanda, Sarchu through Kalpa and Kaza region. Royal Enfield has planned to organise a special first ever Reunion North for the riders in Leh on June 30, 2013. Speaking on the same, Koshy said, “The Royal Enfield REUNION is an opportunity for the Royal Enfield owners to spend a fun-filled day riding out on their beloved motorcycles and spend a fun filled and an amply rejuvenating weekend, away from the usual humdrum of their city.”