CVT Transmission - How does It Work

A transmission or a gearbox is an interface of ratios that are used to vary the input & output loads between the engine & the wheels. Without a bunch of gear-ratios, we’d be stuck with a single gear that would be good in a limited driving scenario. For example, a 1st/2nd gear ratio would suffice only to get the car moving, 3rd/4th gear would only be good within the city, while 5th/6th gear would allow the car to drive at high-speeds. Each of the above would mean that should the conditions change, the car would become unusable. In this auto guide, we shall aim towards gaining an understanding on what do we mean by a CVT transmission and how does it work. 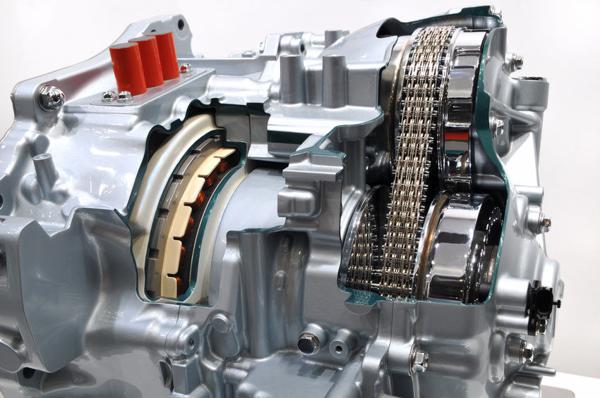 CVT or continuously variable transmission is a type of gearbox that lets the vehicle to be operated at its efficient best, without being restricted by gearing ratios. Thus, unlike a manual or the many automatic transmission options available, a CVT, thanks to its functioning principles, will tend to maximize fuel efficiency across varied driving conditions.

Typical gearboxes whether of the manual or automatic type, tend to use gears to match the engine speed to the desired wheel speed. But no matter how many gears are added or removed, there’s no denying the fact that the ratios will be at best, a great compromise. Manufacturers will go to great lengths to minimize the gear-shifting impact, but it’ll still be there. So how does CVT transmission work? Well, it eliminates the gears completely and replaces them with two pulleys & a belt instead.

One pulley is connected to the engine while the other is connected to the wheels. Thus, by varying the size of the two pulleys, from big to small to big and everything in between, it is possible to have a near endless supply of matched gear ratios. But if all this is good, then why don’t we see greater acceptance for CVT based transmission options.

Keeping the cost & maintenance difficulties aside, driving feel is a huge factor in their slow uptake in the motoring world. The belt between the pulleys results in what is commonly known as the ‘rubber-band’ effect. Essentially, this is when there is a lag between when you dab the throttle, resulting in rising revs and where the power is transmitted to the wheels. This is due to friction losses which are over 10% higher than other conventional gearing options. Also, CVT transmissions tend to come with a performance ceiling & hence, cannot be used in performance oriented setups.

Car manufacturers are well aware of the CVT advantages and disadvantages, working hard at making them more acceptable in terms of performance and driving feel though. So it won’t be long now before a lot more auto-majors start to offer CVT transmissions as an option across their model range.

How To Select The Best Insurance Package For Your Car