Renault has been an innovator in many aspects, and with the increasing demand of fuel and depletion of resources, it has developed a highly efficient concept under the name of EOLAB technology. The advanced 282mpg EOLAB technology represents the number of miles the car can run on a single gallon of fuel. 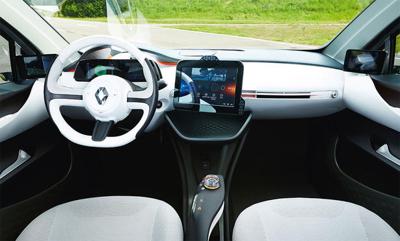 Notably, Renault is a keen producer of many new technologies in the automobile world. This is why, many people prefer Renault cars in India. The new Renault EOLAB Technology incorporates three basic elements, which work together to increase the efficiency of the car, namely weight reduction, aerodynamics and power source. The new Renault EOLAB is all set for a debut at the Paris motor show.

In order to reduce the weight of the car, alternate source like alloy aluminium, magnesium, thermoplastics and advanced steels, etc. is used for constructing the frame. The use of carbon fibre would have increased the cost of the car, so this alternate measure is being taken to implement the 282mpg EOLAB.

This model from Renault has been designed aerodynamically and owing to this, it has a tendency to restrict the resistance caused by the air pressure while driving. The active flaps in the rear also help in the prevention of resistive force to a large extent. The car is said to get power from a 999 cc three-cylinder petrol engine, which could churn out a power of 78 bhp. Along with, there is a 40 kW electric motor, which runs on 6.7 kWh worth of Lithium-Ion battery.

The high quality of Renault cars in India leads to thier increasing demand among the Indian buyers. This car has a futuristic design, with an unmatched efficiency.

Car Financing Myths You Should Know