Bollywood actor Bobby Deol recently got behind the wheel of a new Porsche Cayenne Turbo. Notably, he also owns a Porsche Carrera. Porsche vehicles seem to be a favourite among the B-Town crowd. All notable celebrities like Amitabh Bachchan, Akshay Kumar, Arjun Rampal, Hrithik Roshan, Priyanka Chopra, and Sanjay Dutt have one of these performance cars in their garage. 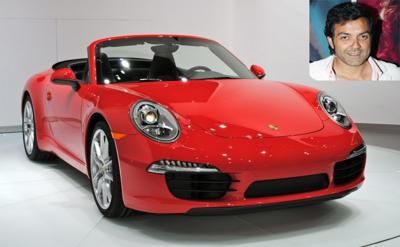 The rate of Porsche cars in India has been rising exponentially for some years now. Many celebrities bought a Porsche to enhance their collection, which gave a new definition to the celebrity cars in India. As a matter of fact, Porsche brand has been a personal favourite of most of the celebrities out in the market and this is a reason, why Porsche vehicles can be seen often rolling on the streets of Mumbai.

Besides Porsche Carrera and Cayenne Turbo, Deol owns a Land Rover Freelander 2 along with a couple of other cars. Bobby shared that his love for cars stretches to that extent that he drove all the way to Aamby Valley City in Lonavala to try out some new models. He adds more about his experience “There was a road show in Lonavala at Aamby Valley City, and there were several models of Porsche over there. I have been a Porsche fanatic since I was a little kid, so I and my close friends, Pranav, Baba, and Sameer Karnik we all drove down to Lonavala to test drive these cars. It was like a typical boys day out for us and we got to lay our hands on every Porsche kept on display over there, right from 911 Turbo Cayman Boxster to the 911 S Cayenne at the airstrip there at Aamby Valley city. It was an enthralling experience and a little more crazy and you have to be very careful while driving.” He goes on to say that although he loves cars very much, he never wanted to be a race car driver and that is best left to the elder Deol.