The Volkswagen Tiguan AllSpace, a SUV from Volkswagen, was launched in India in Mar, 2020. Since Volkswagen’s Tiguan Allspace is now only available in petrol guise, a four-cylinder 2.0-litre turbocharged engine does duty with the assistance of a seven-speed DSG automatic gearbox that sends 188bhp/320Nm to all wheels via the brand’s 4MOTION (4WD). It's a silent motor, this. And powerful too, because getting off the mark is quick and smooth, despite this SUV’s size; almost car-like. Even at legal highway speeds, the power delivery is just about instantaneous, which when coupled to the motor’s refinement makes for a leisurely drive, every time. Making this possible is the manner in which the DSG gearbox seamlessly shifts gears to offer an explicitly linear power output with no jerks or surprises whatsoever.

Specifically put, the Allspace comes into its own post the 2,000rpm mark, after which it makes prominent progress right through the mid-range. This especially helps in keeping ahead of traffic or overtaking those long trucks out on the highway. Plus, the preset driving modes such as Eco, Normal, Sport or Individual allow for varied responses as per one’s requirement; ranging from being absolutely frugal to decent drivability and finally, to a more scintillating power delivery. Although this motor revs all the way to 6,000rpm, it tapers at about 4,200rpm after which there’s more noise than headway. Moreover, having my favourite paddle shifters also means the driver can be in total control of shifts and response to attain the best possible outcome.

This is where the Tiguan Allspace shines. The ride quality, for one, may feel stiff at slow speeds but it gives one the impression of being mature and thoroughly well put together as it drives over the harshness of our roads. As the speed increases, the Allspace simply absorbs almost everything it comes against with a sense of refinement that’s unseen in the segment. The tall ground clearance, too, is a boon. Adding to these traits are the surefooted manners that are a result of the well-judged chassis, balance, and wheels/tyres that allow one to push this VW to its limits. But it has to be the pristine steering manners that serves as the topping on this cake. It’s quick, progressive, and feelsome due to loads of feedback coming in from the wheels and it has just the right amount of heft to it. Undeniably, the steering is one of the biggest contributors to Allspace’s immaculate drivability. Lastly, the discs on all four wheels do a great job of bringing this large SUV to a stop with an excellent feel at the pedal.

Being a VW, the Tiguan Allspace’s spacious cabin is a nice place to spend time in because of the elegant design that’s well laid out, a commanding view outside, and the plenty of storage spaces throughout. And if you’re wondering, it is similar to Tiguan’s insides. Surprisingly, despite there being very few soft-touch materials in use, quality levels along with fit and finish are second to none in the segment.

What’s new though is the fully digital instrumentation to keep up with the times; seriously good looking, is thoroughly comprehensive, and convenient to use too. As for the seats, they’re exquisitely draped in leather, are large, and have a firm cushioning with bucket-loads of support which inadvertently makes them exceedingly comfortable. Even for long hours non-stop. VW has also carved out more room within the cabin as a result of the additional wheelbase, more so in terms of leg- and knee-room.

You see, shoulder-room was abundant to start with, so seating three abreast in the second row continues to be a breeze. However, reaching the third row of seats is like a mission in itself, and thereafter, adults will find themselves cramped up uncomfortably. We ultimately concluded that the last row is best for two children. Alternatively, if you aren’t using those seats folding them away will liberate around 340-litres of luggage space that can easily accommodate everything five adults need to carry on a trip.

As for the features, everything’s stuffed into just one variant for simplicity. So, it’s got auto LED headlamps, cruise control, electric adjustments for the driver’s seat, keyless entry, and multiple charging ports. Then, there’s a multi-functional steering wheel, a panoramic sunroof, powered boot lid, rain-sensing wipers, three-zone climate control, and 60:40 split-folding second-row seats with front seat-back tray-tables. Nonetheless, we’d have loved to see wireless charging, a 360-degree camera, and automatic parking as a part of the kit.

The Volkswagen Allspace is a safe SUV thanks to all the tech that goes into it. It gets seven airbags, ABS with EBD, electronic stability control, hill descent control, auto-hold, parking sensors with a reverse parking camera, ISOFIX mounts, and a tyre pressure monitoring system.

The Volkswagen Tiguan Allspace undeniably has an executive air about it. Sure, it may not look as rugged as other SUVs do. But don’t let that fool you. One of our earlier off-roading sessions proved the Tiguan as quite capable in the slippery and rocky situations. As such, this VW looks balanced despite the extra length over the Tiguan. And a handsome one too, owing to the elegant chrome-tipped nose and sharp lines all across, including the crisp alloy wheels. Overall, the Allspace sheds a sophisticated stance that’s rather understated.

What doesn’t work for the Tiguan Allspace is the price territory it infiltrates into with its steep Rs 43.58 lakh price tag (OTR Mumbai). More so because this is where the big boys BMW, Mercedes, Audi, and Jaguar’s hunting grounds lie. So, for a VW to venture here is logically incorrect to most. But did I say what a brilliant product it is? That is, barring the diminutive last row, of course. It boasts a smart cabin layout that’s exceptionally comfortable, is relaxing to drive be it in the city or the highway, benefits from a strong and refined motor, is dynamically sorted, and has a reasonably long list of usable features. All said and done, the Allspace is one of the very few cars in India that simply puts a smile on your face every time and every day you drive it! Nice one, VW!

Find a list of all 1 petrol versions of Volkswagen Tiguan AllSpace. This table includes on-road price which covers all costs like RTO and Insurance.

Note: ALL Volkswagen Tiguan AllSpace 2.0 TSI have been discontinued.

First unveiled at the 2020 Auto Expo, the Tiguan AllSpace is 109mm longer than the standard Tiguan to accommodate the third row of seats. The seven-seat SUV is a part of the company's SUV offensive under Volkswagen Group's 'India 2.0' project. The vehicle competes against the likes of Toyota Fortuner, Ford Endeavour, and Mahindra Alturas G4.

As compared to the Tiguan, the Tiguan AllSpace gets a revised radiator grille, tweaked LED headlamps, and a redesigned front bumper. The SUV rides on a set of redesigned 18-inch alloy wheels and is also longer than the standard model. Additionally, the rear section gets a distinctive set of LED taillamps.

The Tiguan AllSpace is powered by a BS6 compliant 2.0-litre TSI, four-cylinder petrol motor that generates 187bhp of maximum power and 320Nm of torque. This engine comes mated to a seven-speed DSG along with a 4MOTION drivetrain, which actively monitors the journey. 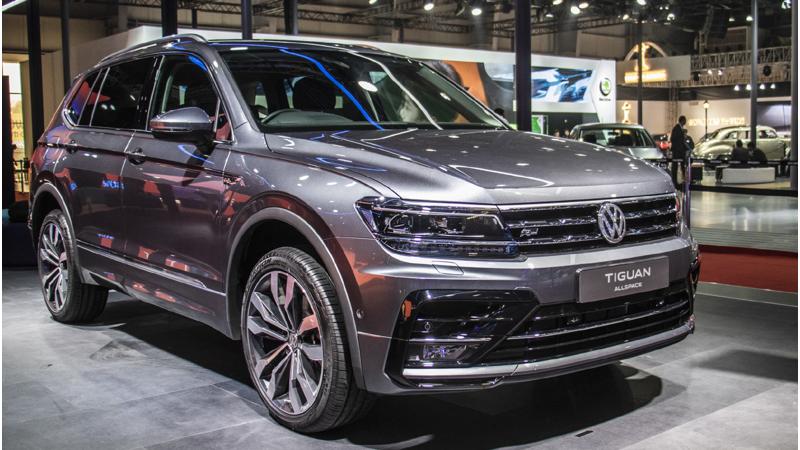 Volkswagen to launch Tiguan AllSpace in India on 6 March

VW-Tiguan-AllSpace-launched Post much wait, the Volkswagen Tiguan AllSpace, has been launched in India. Prices start at Rs 33.12 lakhs (ex-showroom India) for the single trim it is offered in.