After a long wait, motorcycle enthusiasts can rejoice with the launch news of Continental GT by the iconic Royal Enfield for the Indian auto market. The company hinted a late 2013 launch of the bike at the inauguration of its new plant at Oragadam. It is reported that the Continental GT will first debut in United Kingdom and will follow soon for its launch in the Indian market. With its performance oriented 535 cc UCE engine, this bike is set to become the fastest Royal Enfield ever made. 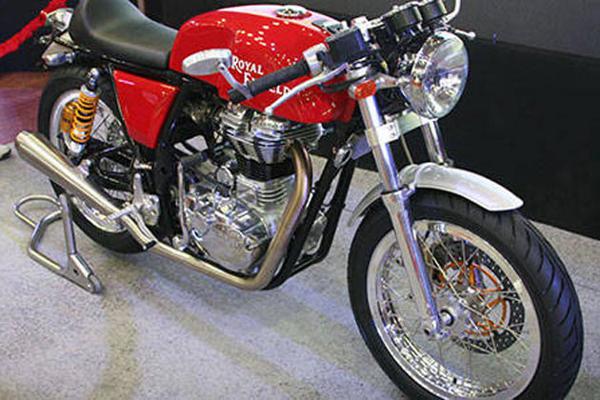 Also, advancements has been made to the kerb weight of the bike, which has been now reduced by 15 kg as compared to the Thunderbird 500 UCE. Industry experts are of a view that the characteristic low grip of handlebars and elongated fuel tank gives a distinction to the 1965 GT250 model. The all new chassis has been developed by the renowned Harris Engineering of United Kingdom. This upcoming model will have a larger piston and a more lengthy throttle body. Its remapped ECU will get benefit from the single pot, along with a lighter flywheel.

As believed, this bike can clock speed of over 150 kmph, owing to its powerful 535 cc engine. Apart from it, the ride comfort will be customised with Pirelli tires and Paioli gas shockers. Sources close to the development process revealed that the Continental GT is rumoured to churn out a maximum power of around 33 to 35 bhp. Continental GT was initially introduced as Cafe Racer concept during the 2012 New Delhi Auto Expo. The Cafe Racer type is popular in various markets, most notably in the European regions. These bikes are mainly known for their tuned engines, which help it to reach a high speed, without compromising on comfort.

The key USP of 2013 Continental GT are expected to be disc brakes at both front and rear end of the bike and clip-on handle bars. Typically, low hung handle bars and long fuel tanks are present to give the rider a better control and posture for accelerating the bike. Meanwhile, the pricing of this bike can be anywhere between Rs. 2.3 lakh to Rs. 2.5 lakh.