New Honda Accord V6 in India Next Week

"We are ready with our new Accord V6 and it will be launched by next week," Honda Siel Cars India President and CEO Masahiro Takedahawa. Honda is ready to launch its advanced version of its premium sedan in India next week. It will be powered by 3.5 litre engine generating 280hp. The current model in India comes with 2.4 litre engine that generates 180hp and is priced at Rs. 16.72 lakh (ex-showroom). 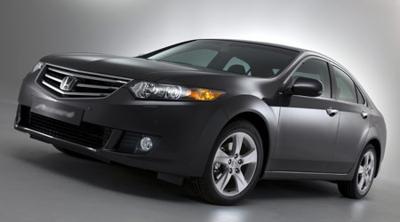 The expected price of the new model is about Rs. 25 lakh. "I cannot say it specifically now, but looking at the specifications of the car, I expect this to be priced at around Rs 25 lakh," said Takedahawa.

Honda has already announced plans to launch its premium hatchback 'Jazz' in the country by mid-2009. The car would have a 1.2 litre engine, specifically meant for Indian regulations to avail 12.5 per cent tax rebate. The company has already cut down its production by over 45 percent and has put development of its second manufacturing plant on hold. The company has reduced the production of its Greater Noida plant from 400 cars to 200 cars a day on a single shift basis. It would commission the second plant once the Indian market witnesses better demand and robust sales figures.