Mercedes-Benz, the world renowned German luxury automotive marque, has unveiled an B-Class Electric Drive premium model at the 2013 New York Motor Show. The production-ready electric powered hatchback managed to pull off some great reviews on both the technology and styling fronts, from the top industry critics and media at the auto salon. At present, Mercedes-Benz has the B-Class Sports Tourer mesmerising domestic buyers in the country. 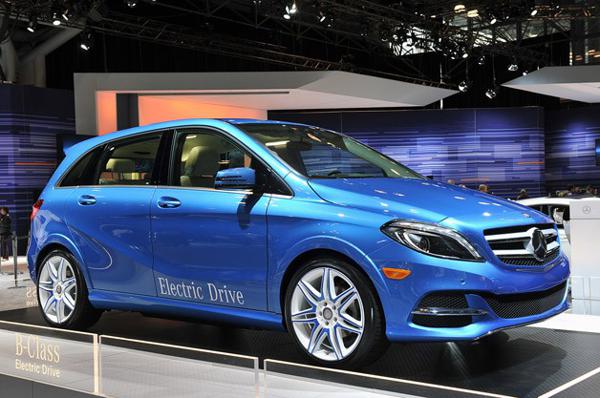 The German auto maker stole the limelight in New York with its stunning B-Class Electric Drive model, which flaunted a new design language, glossy blue paint job and breathtaking alloy wheels. The electric powered premium hatchback is headed to the auto market of United States and will be introduced in other regions depending upon the demand for such vehicles.

As per reports, the Mercedes-Benz B-Class Electric Drive model boasts off an inspiring driving range (up to 200 km) on a single charge. The cutting edge technology laden can be charged from 0 to 100 per cent battery power in just 2 hours, which makes it an immensely attractive electric powered model. The Mercedes-Benz Electric Drive car is powered by an electric motor that derives its power from a rechargeable lithium ion battery. The battery churns out a maximum power output of 132 bhp, along with a highest torque delivery close to 310 Nm.

The 132 bhp rated electric motor allows the Mercedes-Benz B-Class Electric Drive to accelerate from 0 to 96 kmph in just fraction less than 10 seconds. Further, the battery powered vehicle has its top speed restricted to 160 kmph. The battery set up is incorporated in the B-Class Electric Drive's floor, thereby helping in saving space volume. The battery set up allows complies with the safety standards of the car, and is designed to protect in case of an external impact. It must be noted that the safety aspects and interior space volume of the recently showcased B-class Electric Drive are similar to those of the conventional B-class hatchback.

Among the many high end technical innovations, the Mercedes-Benz B-Class Electric Drive also comes trimmed with a feature called- ‘Vehicle Homepage’ that allows owners to exchange vehicle information in a unique manner. For instance, the owner can connect to the vehicle's on-board computer via the internet using a smartphone or a laptop and check basic diagnostics. The Vehicle Homepage allows the owner to monitor the car's battery status and range, besides commanding the on-board computer to either pre-heat or cool the cabin, before taking the car on a drive.

Honda Odyssey MPV can be a premium MPV for India