Mahindra Reva Electric Vehicles Private Limited (MREVPL), a subsidiary of the $ 15.4 billion worth Mahindra Group, rolled out their first electric vehicle after merge, the E2O compact hatchback from their cutting-edge Bangalore facility on January 30, 2013. The latest development will surely bring delight to the Indian car enthusiasts who were eagerly following the developments regarding Mahindra E2O, since it was unveiled at the 2012 New Delhi Auto Expo. Industry sources suggest that Mahindra Reva could introduce the E2O model in domestic passenger car market, by the end of ongoing 2012-13 fiscal. The electric vehicle is expected to come with introductory price tag close to Rs. 5 to 6 lakhs in the country. However, Mahindra Reva is waiting for the 2013 Union Budget that will shed light on the Indian Government's take on automobile manufacturing and renewal energy policy, which could influence overall pricing of the car. 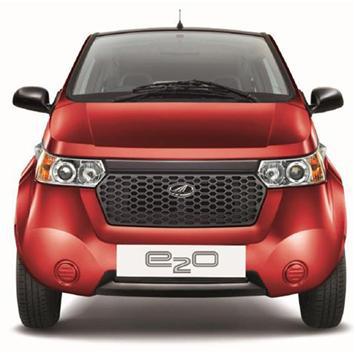 Pegged as a revolutionary model for the entire domestic auto sector, the Mahindra E2O comes powered with a solar charging panel that allows the vehicle to charge itself free of cost and avoiding all investment towards fuel. However, the company claims that only expenditure involved will be towards replacement of batteries based on usage and recharging patterns.

Commenting on the manufacturing operations of E2O, Chetan Maini, Founder and Chief of Technology and Strategy, Mahindra Reva, was quoted as saying, “About 75% of the bill of materials in the E2O is for components never used in a car before. That’s one reason we didn’t need a hundred years of experience in automobile design to build the E2O. Past experience in developing and manufacturing a game-shifting car like this is almost irrelevant.”

Speaking on the most outrageous possible usage and incredible power of the Mahindra Reva E2O electric cars, Maini said, “When the northern grid went down in mid-2012, resulting in the worst power outage in the history of the country, it would have taken just 100,000 E2O cars in Delhi to feed 1,000 MW of energy back into the grid.”

The Mahindra Reva E2O is a two-door, four-seater, compact hatch and is anticipated to come assimilated with the much fawned upon automatic transmission system. The electric powered model is expected to feature a solar panel as an added option that can be availed by paying an extra sum of Rs. 1 lakhs. The Mahindra E2O is manufactured at the company's world-class electric vehicle production unit in Bangalore. Mahindra Reva's Bangalore-based facility is the country first platinum certified automobile production unit. The electric vehicle assembly plant boasts off an annual output of 30,000 units.