GM India is planning to bring a new variant of its popular small car model Chevrolet Spark to India. The Indian arm of the US auto maker General Motors remains unaffected by the bankruptcy filed by its parent company. With its operations from Halol, Gujarat, the company has already got its plans lined up for Indian market. It will unveil the new model for Chevrolet Spark this Friday.

GM India is upbeat with the upcoming launch and also plans to launch an ultra-cheap car by 2011 that will be placed below Spark. The new car will be developed in India and will be priced around Rs. 2 lakh. It will cater to the demands from growing economies like China, India, Brazil and other counties like Latin America, Russia, etc. 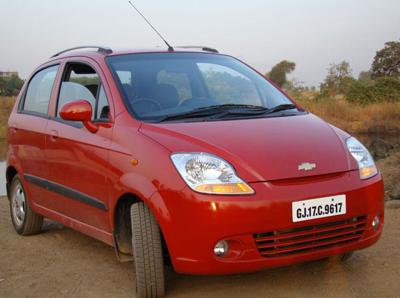 Meanwhile, the parent company General Motors which filed chapter 11 on Monday is ready to dispose of its brands like Saturn and Hummer. The company has agreed to sell its brand Hummer to a Chinese auto maker Sichuan Tengzhong Heavy Industrial Machinery Co. The takeover by this little known Chinese firm will save at least 3000 jobs in US. The GM plant in the US will continue to make Hummer for its new owner until at least 2010.

Bankers of General Motors have also tapped a dozen carmakers including M&M and Tata Motors to sell its brand Saturn. The company is disposing its assets as a part of its bankruptcy procedures which will lead to a new but small General Motors under the control of the government.