CBF 150 and Unicorn from Honda

Honda again plans to launch limited edition models of Unicorn and its 150cc bike. The new variants of Unicorn will be loaded with special body graphics and new features. It had introduced limited edition Unicorn last year as well. The Grand Prix edition from Honda was first introduced in Repsol colors with fluorescent orange alloys. The next one was launched in racing blue, green and white livery colours. 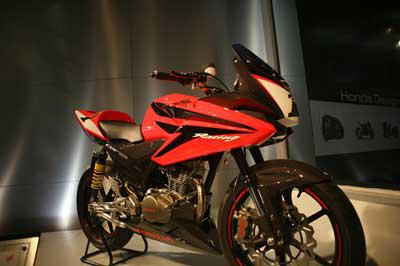 Honda’s another model in 150cc segment will be launched to compete with Yamaha’s FZ-16 that was launched last year. CBF 150 was the first model in India from Honda that was launched with Fuel Injection technology. The company imported few CBF150 for racing event in Irungaattukottai last year. It held Honda Motor Sports event in India which showcased these bikes. The company has provided little information on this technology and is still waiting for a formal launch of these bikes. However, it is expected that these bikes will come with sporty designs and fat rear tyre.