Hero MotoCorp., the leading two-wheeler maker in the Indian auto market, on Saturday, uncovered its first ever concept hybrid scooter at the Delhi International Auto Expo 2012. The new age hybrid scooter will be developed in partnership with a foreign consulting firm.

Speaking to the reporters at the unveiling ceremony, Hero MotoCorp Managing Director and Chief Executive Officer Pawan Munjal said, "This is a first ever series from India. We are showing the rest of the world that we have arrived." He added that the company will definitely bring it into production in future. It will have to work a lot for launching it commercially. So it will take some time." 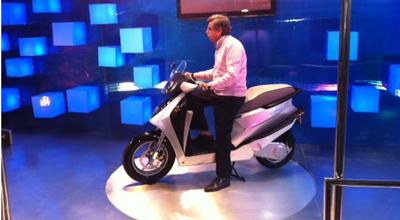 LEAP, the name given to the concept hybrid Scooter, has been indegeniously developed with an international consultant, keeping into consideration the future needs and requirements of the Indian buyers of this segment. The hybrid scooter of Hero MotoCorp will come powered with an engine which will start offering power as soon as the battery power goes down.