Audi India, the domestic division of well acclaimed German auto maker, has revealed its plans to introduce the R8 V10 Plus model in the auto market. Interestingly, sources close to the development process stated that the model will witness the Indian daylight on April 4, 2013 amid great buzz. Reportedly, the car maker is considering the Buddh International Circuit for the launch of its much appreciated model in India. It must be noted that R8 V10 Plus is a more performance oriented model of the normal R8 and thus, its launch will be followed by a number of auto aficionados across the country. 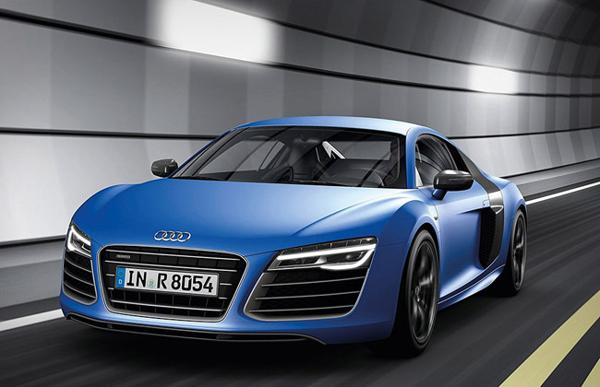 The upcoming model will come equipped with the same 5.2 litre V10 engine, which has been sourced from Lamborghini. However, this power mill is not familiar with the Indian audience as it is assimilated within the R8 Spyder and R8 V10 Coupe. The engine of new Plus variant in R8 line up will churn out a maximum power of 550 bhp, instead of regular 525 bhp. The peak torque delivery of this motor has been also increased by 10 Nm by taking the output to 540 Nm. Owing to its 7-speed S-Tronic transmission system and Quattro technology, this output is equally sent to all the four wheels of R8 V10 Plus.

With this output, the model smoothly accelerates from initial to 100 kmph within just 3.5 seconds, which made it 0.1 second faster than the normal R8. Interestingly, it further clocks a top speed of 317 kmph, which has been again increased by 3 kmph than its regular V10 sibling. It musty be noted that R8 V10 Plus is the fastest production car designed by Audi, as of now.

However, the German auto maker has not revealed the pricing of its upcoming model yet for the Indian auto market. But industry experts are of a view that Audi India has to price the upcoming model quite aggressively as already the recently presented Union Budget has impacted hard on the sentiments of overseas auto makers.