Renault India had pulled off the curtains over its much awaited sleek beauty, 'Fluence' during the last month held Auto Expo event in Delhi. At the event, a large number of spellbound enthusiast were seen flocking to the stand that showcased the Fluence sedan loaded with smooth curves and stylish design. The Renault Fluence has finally been launched in the Indian market last week after much anticipation and glamor surrounding its launch. Bookings for the diesel version of this sedan was being taken by local dealers at a price of Rs. 50,000. Full scale production for the Fluence line is based out at the Oragadam facility in Chennai. The smart sedan carries a starting price tag of Rs 13.99 Lakh (ex-showroom Delhi) for the E2 trim and the E4 trim is put up for grabs at Rs 15.81 Lakh (ex-showroom Delhi). 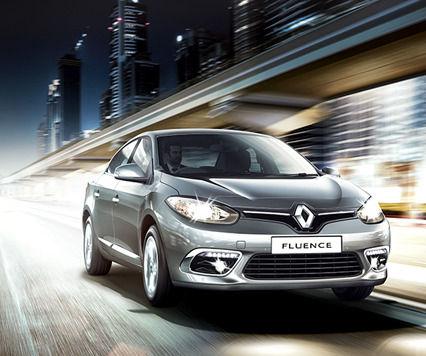 The Renault Fluence sedan is available in both petrol and diesel variants. The petrol single trim variant is powered by 2.0 Litre engine that is mated to six-speed CVT gearbox, whereas the diesel version gets a 1.5 Litre engine that is mated to six-speed manual transmission and generates about 110 Ps of power with 240 Nm of torque. As per ARAI certification, the diesel variant returned an impressive 20.4 kmpl. The diesel sedan shall be available in two variants E2 and E4.

The front fascia looks sportier and little aggressive in comparison to its previous counterpart. The headlamps with LED daytime running lamps are longer and flow in an upward direction. Front bumper gets a large grill which is complimented with a new set of fog lamps. The 16-inch alloy wheels are also quite impressive. For the interiors the sedan gets soft touch dashboard, illuminated glove box, up to date infotainment system, engine Start/Stop button and electrically adjustable mirrors. The seating area has an upmarket feel and looks rich.

Safety has always been of prime importance for Renault on a global level. For maximum safety, the Renault Fluence sedan gets front and side chest airbags, follow me headlamps, and EBD, ABS and ESP technology. The sedan has also received specially tweaked suspension that can deliver comfortable driving experience over unpredictable Indian road conditions. The local market has not exactly been favorable for the international car-maker, but with this new launch Renault aims at gaining a strong footing in the Indian market.

Suzuki to launch CVT variant of Celerio in Thailand