The new BMW 6 Series GT, a Sedan from BMW, was launched in India in Apr, 2021. 6 Series GT has received 99% rating score from our users. 6 Series GT is preferred for its Comfort and Performance.

6 Series GT competes with Mercedes-Benz E-Class, BMW 5 Series and Audi A6 in India. My fingers are wrapped around the steering of the 6 Series GT 630i. One that uses a 258bhp/400Nm 2.0-litre twin-turbo four-cylinder petrol motor to spin the rear wheels via an eight-speed automatic transmission. At large, the 6GT stable also comprises two diesels; a 261bhp/620Nm 3.0-litre six-cylinder mill and a 188bhp/400Nm 2.0-litre four-cylinder one. For a snazzy GT, those expecting a drool-worthy V8 or V10 will now have to look elsewhere. As for this petrol, feathering the throttle is enough for one to grasp that this motor means business. At the word go, there’s so much torque from way low down that it not only aids getting off the line eagerly with enthusiasm, but also climbs speeds with utmost zest.

In reality, I was gobsmacked by the facile manner in which we consistently trespassed three-digit speeds. Refined, it certainly is. And for a car that size, I’d say smacking the 100kmph barrier in 6.77 seconds is quite the feat. The food-for-soul moment being the rewarding engine note as it holds out for the red-line. Equally entertaining is the etiquette in which BMW has tuned its powertrain for mid-range grunt. Overtaking, be it in the city or on fast highways is, plainly put, unchallenging. This is portrayed in our drivability tests of 20-80kmph/40-100kmph (kick-down) which took only 4.04 seconds/ 4.54 seconds. Moreover, facilitating these manners are pre-set drive modes - Eco Pro, Comfort and Sport. These alter the damping, steering, engine and gearbox characteristics between being frugal to a truly engaging demeanour, at the twitch of a button.

Armed with an air suspension, this 6GT offers a plush ride quality that isolates the cabin from even the severest of road conditions. However, despite the reasonable clearance, keeping an eye out for the taller obstacles can avoid nasty surprises considering this is a long sedan. Also, despite the pristine insulation, some road noise creeps in which clearly boils down to the large 19-inch wheels. All said and done, Sport mode makes the steering heavier while firming up the ride quality. Both, in the interests of an engaging drive. However, like its predecessor, there’s a fair amount of body roll which doesn’t ring well with the 6GT being punished around corners.

Since the 6GT is essentially a 5 Series with added space and the practicality resulting thereof, this is where all the attention has been focussed. It’s a growing lot considering this breed has expanded over the years, much like Mercedes’ long-wheelbase E-Class; the chauffeur-driven. As such, the only downside to the rear bench in the 6GT is that the tall transmission tunnel and protruding AC vents limit it strictly to two passengers. On the contrary, the rear portion offers loads of space with plenty of knee room and acres of headroom even for tall occupants. Plus, the rear seat experience takes a step forward with the long list of comfort goodies.

In addition to the regulars such as multi-zone climate control, rear armrest with cup holders and four USB type-C charging ports, it also gets two tablet displays that are run by the iDrive system to control stuff like media, navigation and some. At the same time, another highlight of the 6GT is the massive 610-litre boot space that’s mated to an under-floor storage compartment owing to the absence of a spare wheel. Besides that, the boot space swells substantially when the rear bench is folded and with a loading lip that’s reasonably low, lifting baggage isn’t a back-breaking affair either.

That apart, the driver gets to indulge in the exquisitely finished black-caramel coloured cabin/dash that has oodles of soft-touch materials and other premium bits/trim. But rear visibility takes a huge hit due to the intensely raked roofline. As for the front seats, since the chauffeur is going to be sincerely pampered with great support and comfort, expect to reach your destination to be reached without any hiccups. In terms of features, the 6GT boasts of leather upholstery, a driver’s seat with memory function, electrically adjustable steering, powered boot-lid and all-digital instrumentation along with a 12.3-inch touchscreen (Apple CarPlay/Android Auto compatible) that runs the brand’s latest iDrive system.

When it comes to safety, the 6 Series GT gets eight airbags, ABS with EBD, traction control, tyre pressure monitoring (TPMS), stability control and ISOFIX child seat mounting points. A nice addition is the auto parking function which parks the car for you. All one needs to do here is feed the throttle and brake when needed.

To clear the air, the 6GT is essentially a notchback version of the 5 Series. Yet, I have to admit that the severely bloated hatchback rear of the 6GT takes some getting used to. But for what it’s worth, at least the 5 Series’ nose makes things sharper. Sure, I wouldn’t say both ends gel the way I’d like it to, but I suppose BMW didn’t have much of a choice either. As things stand though, it looks decidedly sportier than the outgoing 6GT which looked distastefully voluptuous.

Sure, looks can be deceptive to some, but if it isn’t ranked high on your list, then why bother at all? Likewise, the 6 Series GT lacks a lot of second-row comfort features, more so when you pit it against its rivals. Having said that though, the 6GT’s gameplay couldn’t have been clearer. If you need more space, comfort and practicality out of the 5 Series, then this car is undoubtedly your best bet. It’s also favourably dynamic from almost every angle you can think of. Well, almost!

6 Series GT has received a very favourable 99% approval rating based on 16 user reviews.

Based on 16 User Ratings

Users prefer to buy 6 Series GT for Comfort (96% rating) and Performance (96% rating). The least appreciated parameters are Mileage (85%) and Value for Money (93%).

How 6 Series GT fares against competition?

Find a list of all 2 petrol and 2 diesel versions of BMW 6 Series GT. This table includes on-road price which covers all costs like RTO and Insurance.

BMW India has launched the 2021 6 Series GT in India. The updated 6GT is essentially the ‘Tourer’ version of the 5 Series that scores more on space and practicality. The latest iteration is locally and gets styling updates, added equipment, three powertrain options, and three variants to choose from.

On the outside, the 6 GT appears similar to the earlier model sporting the coupe-like sloping roof flowing down to the boot section. To give it a fresh touch, BMW has tweaked the front and rear bumpers to give it a more aggressive appearance. Even the adaptive LED head lamps are slimmer with a new dual L-shaped DRLs. The vertical slats on the signature kidney grille are now finished in chrome giving it a more premium appeal. It also gets a new design for the split LED tail lamps with graphic design and dual functional exhaust tail pipes.

Inside, the cabin layout remains the same as on the older model with the use of two-tone colour for the upholstery. It also gets a dual-screen setup. An infotainment system and a digital instrument cluster both sized 12.3-inch dominate the dashboard apart from other features such as a panoramic sunroof, dimmable ambient lighting, electronically adjustable front seats with memory function. 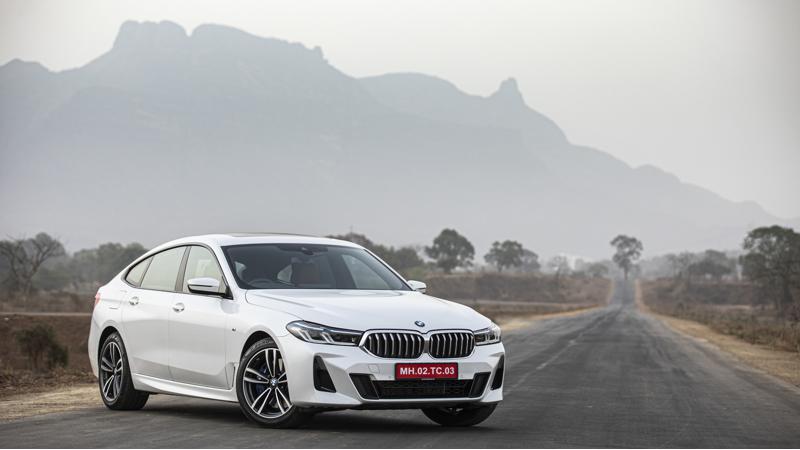