BMW 7-Series has been discontinued in 2023. We are showing the last known price for 7-Series.

Check details of the latest 7 Series

There is nothing quite like a top-of-the-line luxury sedan. It’s a well-established body style, familiar across generations for symbolising the ultimate in luxury and is one of the few places in this day and age of SUVs where the sedan has managed to stand its ground.
Well, this car, the BMW 7 Series, is a stalwart of this cause and in this facelifted guise looks to have come to the fight fully armed and ready to go. Launched earlier this year, there are quite a few changes to the car both on the inside and outside but in that understated BMW way.

That kidney grille!
It is the first thing that catches your attention when you look at the 7 Series from the front. It leaves you in little doubt as to which BMW sedan you are driving. Imposing as it is, the grille is not the only major exterior update for the face. The bonnet and headlamps have both undergone some major sculpting and now look more imposing than the outgoing model. In the case of the latter, they have become smaller and more angular with the laser elements adding a nice blue colour to the whole appearance. The front bumpers too have got a facelift with a design leaning towards angular shapes and subtle doses of chrome.

In profile, the large overhangs on both ends add significantly to the size of the car while the tapering roofline does give it a sporty appearance. The extra length comes courtesy of this car being a long-wheelbase model but then again India has only had the 7 Series as LWB model since its inception here.
Head over to the back and you are greeted by the massive one-piece light bar and exhaust pipe slots. BMW was one of the pioneers of the wrap-around tail lamp and in this evolution of the 7 Series, the minimalist light package does well to give the car a futuristic appearance. The massive tyres and high boot lid give the car a unique appearance.
As imposing as the 7 Series looks due to its massive size, generous dollops of chrome and flamboyant LED light package, it is still understated in its design as has always been the case with BMW’s design language

Where BMW has put most of its money is concerning the interiors is to create an environment that would pamper its occupants. Given its size, space is not an issue at all. The 7 Series in this LWB format sports a wheelbase of 3210mm which to put in relative terms is just 135mm off the entire length of the Maruti Suzuki Alto.
Despite the hefty performance figures, this is a luxury limo through and through and for that BMW has done a good job with the offerings in the rear seats.

It’s a space filled with leather, wood inserts and high-quality plastics all around. You get hot and cold massage function, ambient lighting, four-zone climate control, retractable cup holders in the centre armrest and a tablet (with a holder in the centre armrest) that lets you control all the functions of the car. The display quality on the tablets is HD and there’s even a theatre sound mode on offer.
The party piece is, of course, the lounge function that allows the front passenger seat to be slid all the way forward with a flap on the seatback acting as support to elevate your feet.

The insulation from the outside world is spot on for a car of this pedigree. Hardly any sound from the outside filters beyond the level of a low whisper and the only time we heard anything significant was on concrete roads due to the run-flat tyres.
The boot while deep and cavernous is at a slight disadvantage for India as due to Government regulations, there is a massive spare tyre occupying most of the depth. Still, it is not what you would call small or lacking space and the only other major disadvantage we can see is a high loading lip height.

The front seats are cushy and supportive with the same design traits as the rear ones. You can sink right in for a long and comfortable drive and get yourself in just the right position thanks to everything being electronically adjustable. One of the major highlights on the dashboard is, of course, the iDRIVE system which now runs off a 10.25-inch display capable of working with gesture control and also offering Apple CarPlay/Android Auto.

This BMW 730Ld is powered by a 3.0-litre inline-six diesel producing 262bhp and a rather monstrous 620Nm of torque. The Indian market gets the car only in rear-wheel drive guise and this is achieved through an eight-speed automatic.
As large as that torque figure is, the engine needs it to smoothly lug the car’s 5.2-metre length and the eight-speed gearbox does a really good job of making things easy on the go.

We pushed the 7 Series through a chain of our performance tests and discovered that it has a 20kmph-80kmph roll on time of just 3.94 seconds as well a 40kmph to 100kmph time of 4.74 seconds. The all-important 0-100kmph sprint is done and dusted in just 6.37 seconds making this faster than cars that are half its size and weight. For the uninitiated, these performance figures indicate that the 7 Series (in this 730Ld guise) is no slouch when it comes to getting where you need to go quickly. A fact that becomes even more surprising when you consider that most owners would use the car with a chauffeur for the entirety of its life.

You get multiple drive modes - Eco pro, comfort and sport. Each of these modes alter the response of the drive train as well as the suspension. Eco pro, as the name suggests, is the most frugal of the lot and give the car the characteristics of shifting early in the rev range and limiting the top speed. The comfort mode is a step up from the Eco pro mode while the sport mode allows for maximum power with a slightly stiffer than normal ride and quicker responses from the steering wheel.
The adaptive air suspension like we said earlier is one of the elements that change its responses based on drive mode. This being a luxury barge, comfort is the goal and for the most, the suspension is very good at giving you a supple ride and filtering out the roughness of the road. This is very evident in Eco pro and comfort mode. The stiffness of sport mode is good for when you need to lay down the hammer but can become unnerving for those sitting in the back due to every little imperfection being picked up along the way.
This being a BMW, it is still fun to drive and the surprise of this was the steering. It weighed up correctly with an increase in speed and offered decent feedback through the corners.

There is no doubt that the BMW 7 Series offers whatever it takes to keep itself relevant in the segment. The diesel engine, light steering and multiple drive modes make this a fun car to get behind the wheel of - that is if you can wrap your head around its massive size. The interior comfort is on par for the segment and makes a worthy case for those who want to get in the back and need to get somewhere where they can make enough money to afford to buy a car like the 7 Series. In this day and age of everything being swallowed up by the SUV wave, a car like the 7 Series reminds us of the lure of a luxury flagship sedan.

The BMW 7 Series is offered across six versions and three engine options with prices in the range of Rs 1.48 crores to Rs 2.75 crores (on-road, Mumbai).

Up front the 7 Series gets enlarged double kidney grille that complement the slender adaptive LED headlights with BMW Laserlight technology. The reduced bodylines gives it a powerful and refined charm without losing on its sporty character. The sides look elegant with a coupe-like roof line and a chrome trim at the bottom. The rear is extremely wide and is dominated by powerful horizontal lines. A thin light strip positioned below the chrome band stretches across the entire width seamlessly connecting the tail lights.

The BMW 745Le xDrive plug-in hybrid variant is powered by a new lithium-ion battery that produces 108bhp and a maximum torque of 265Nm. The BMW TwinPower Turbo 3.0-litre six-cylinder petrol engine produces 286bhp and a maximum torque of 450Nm at 1,380 – 5,000rpm. The petrol engine combined with the electrical boost of the hybrid system delivers a total of 384bhp and a maximum torque of 600 Nm. The vehicle claims to deliver an excellent fuel-efficiency of up to 39.5kmpl. The car accelerates from 0-100kmph in 5.3 seconds and has a top speed of up to 250kmph. Running on battery power alone, the car achieves a top speed of 140kmph with an electric drive range of 53kms. Using a standard charging cable, the car be charged overnight (8 – 12 hours) from any conventional 220V mains socket. Using the BMW wallbox charger, it can be charged in 4 - 5 hours. The BMW plug-in-hybrid drivetrain charges the battery on the move using energy generated from various components. 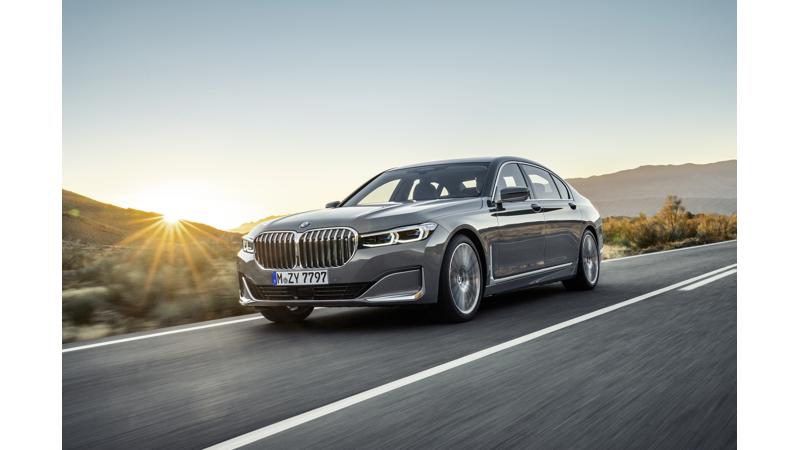 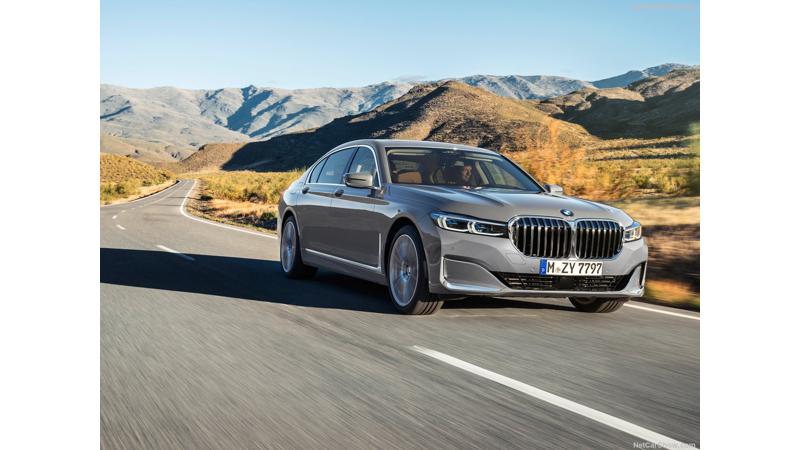 BMW has given its flagship 7 Series a mid-life update and will launch the car globally as a 2020 model. It&rsquo;s expected to come to India later this year and will be offered in both petrol and

BMW announces price hike of all models from 4 January 2021

BMW 7 Series BMW India has declared that it will be revising and increasing the prices for all BMW and MINI range of models effective from 4 January 2021. The German car manufacturer attributes

BMW has taken the wraps off the new and updated 7 Series. The Bavarian flagship now gets an imposing design language with a rejigged powertrain and updated interiors. Following the official debut in