The Sizzling Chemistry Between Kamal Hassan And His Audi A8 Limousine

Kamal Hassan carries an image for making statement in whatever he does be it acting, direction, production, screenwriting, choreography, or playback singing. A protean personality and a legendary star,  his supremacy is well-established by his luxurious fleet of cars that includes a 5-door Land Rover Range Rover Evoque, Chevrolet Camaro Convertible Edition, Hummer H2, Mitsubishi Pajero, and Land Cruiser Prado. A new feather to this lavish cap was recently added with an Audi A8 Limousine. This widely acclaimed performer has been sited driving a white colored A8 L on Chennai roads many times in last four years. His affinity for Audi cars is well-reflected from the fact that out of his exclusive collection, A8 L is the only car that he drives wherever he goes. 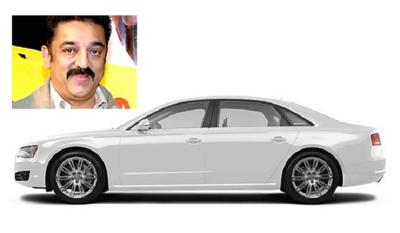 Kamal hassan and his audi a8 limousine

Manufactured over a leading technology platform, the Audi A8 L forayed in Indian market in year 2011. Out of all Audi cars in India, the A8 gets the title of being the most lavished and sophisticated masterpieces created by the German car maker. Its four variants – 4.2 FSI Quattro, L W12 Quattro, 3.0 TDI Quattro and 4.2 TDI Quattro - are offered in a price bracket of Rs. 70 lacs – Rs.1.3 crores. All these variants propel on different engine configurations, but stand equal with respect to comfort and luxury. Among all Audi cars in India, it stands on top with a long list of distinguishing features that includes Quattro with sports differential, two piece panoramic sunroof, ambient lighting, 4-zone automatic air conditioning, Audi drive select, and rear seat entertainment system. No doubt the legendary star surrendered to its allure. And he is not the only one, there are a number of celebrities who prefer to ride in their Audis be it Abhishek Bachchan, Dhanush, Asin, Kajol, Ranbir Kapoor, and several others. It has unanimously gained the title of selling maximum celebrity cars in India.

Fuel Saving Tips For Every Driver