Ram Charan In His Aston Martin

Celebrities love flaunting their luxurious and expensive sports cars, and some of them are known for their splendid collection. Ram Charan, the famous Telugu actor, is one of the few celebrities who are obsessed for swanky and powerful cars. The actor owns a Mercedes-Benze SLK 280, Audi A4, Range Rover Evoque, Aston Martin V8 Vantage and a Jeep. 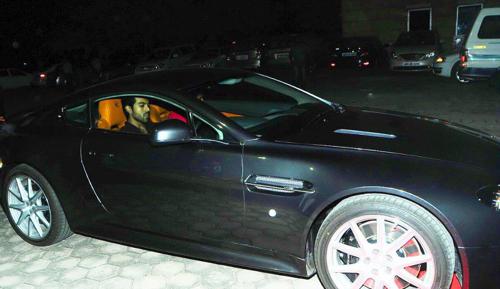 Ram Charan in his Aston Martin

The V8 Vantage from Aston Martin is one of his favorite cars which has also been featured in James Bond. The V8 Vantage was gifted to him by his in-laws as a wedding gift. It’s an iconic British sports car, though it’s not among the popular celebrity cars. The Vantage has always been known for its aggression, driver-centric design and compactness. This model is based on shortened version of the aluminum VH platform, while its longer version is used for the more expensive DB9 and Vanquish.

The Aston Martin V8 Vantage shares its styling elements with the DB9, but in a compact frame. It sports intricate Xenon lights with LED indicators, the stencil vents surrounded by a slim line of chrome flowing into the door metal, stunning flip-out door handles and rear view mirrors.

The car received significant styling alterations in 2012, inspired from its special edition models. Exterior updates include re-designed lower front bumper with a large air intake, a rear diffuser and new side creases. The interior, too, looks very sporty and premium. Seats are extremely supportive and comfortable for long journeys. The full leather interior and Garmin’s satellite navigation along with cruise control and Bluetooth connectivity come as standard features.

The V8 Vantage is power-packed with a 4.8-litre V8 engine that produces a whopping 420bhp with 470Nm. The manual version of the car is claimed to achieve 0-60mph in 4.7 seconds, while the Sportshift II automatic takes 4.3 seconds. The V8 Vantage is a pure pleasure to drive. It’s quick, stable, and never complains about uneven surfaces. Cruising ability is excellent. Initially, the Vantage feels bit snappy, but as the speed increases, it shows its core strengths i.e. stable and balanced drive and outstanding body control. Aston Martin cars in India are quite a rare sight, since they are owned by a few celebrities and business tycoons.

10 Cars Worth A Drive For Road Trip In India