The rapid depletion of petroleum fuels and their ever increasing cost have led to an intensive search for alternative fuels. One of the most promising substitutes for petroleum, are today considered alcohols, mainly methanol and ethanol. These alcohols can be readily made from a number of non-petroleum sources. Methanol or methyl alcohol (CH3OH) can be produced from coal, a relatively abundant fossil fuel. Ethanol or ethyl alcohol (C2H5OH) – the alcohol found in alcoholic beverages - can be produced by fermentation of carbohydrates which occur naturally and abundantly in plants like sugarcane and starchy materials like corn and potatoes. Hence, these fuels can be produced highly reliable, long lasting and even renewable raw materials.

Today, we take a look at alcohol as a fuel for cars. How do they work and how are they implemented in our vehicles. Let’s start from the beginning – how are they made?

Methanol, an organic fuel, can be produced from a wide range of abundantly available raw materials such as coal, municipal solid wastes or specifically grown biomass. Methanol can also be produced from natural gas, though this would defeat the purpose as the basic objective of using these fuels is to conserve petroleum gases or liquids.
While the exact chemical process is too far to go into here, usually, methane is derived from above sources, which is then reacted into methanol.

Ethanol is usually manufactured from any feed stock containing carbohydrates such as corn, wheat, sugar-beets, potatoes, sugarcane and other grains. The process is driven through fermentation and is indeed not dissimilar from production of alcoholic drinks. As an example, let us take a look at how ethanol can be made from sugarcane.

For manufacturing ethanol from sugarcane, the cane is first cut and ground, and the cane juice is extracted by maceration. After clarification of the juice through filtration and subsequent concentration through evaporation, the juice is fermented with yeast to yield ethanol. A series of distillation steps including a final extractive distillation with benzene are used to obtain ethanol.

The chemical reaction of fermentation encompasses conversion of glucose into ethanol. In this process 180 gm of glucose are converted to liquid fuel ethanol weighing 92gm with almost no loss of energy. 1.5 KG of sugar would yields about a liter of ethanol.

Derived from plants, ethanol is generally referred to as bio fuel. 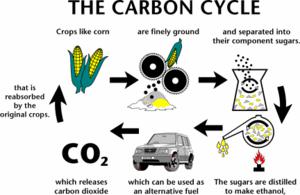 Using Alcohol as a Fuel

In general, ethanol can be blended with petrol and directly used as a fuel for your car, perhaps with very minor adjustments for differences in combustion process. Indeed, many US cities already mandate that all fuels sold in their cities have a 10% blend of ethanol and most cars produced today can be assumed to allow such a blend.

For usage of higher concentration blends, certain adoptions need to be made in the engine and materials used, but these changes are relatively minor. In Brazil today, we find cars and even bikes that allow a range of 10% to 100% ethanol blends, showing that petrol and ethanol are relatively comparable.

The calorific value of methanol (the energy it contains) is about 10% less than petrol’s. However, usage of methanol allows the engine to operate at a higher compression ratio, resulting in a more efficient thermodynamic process. This percentage is estimated at about 20% higher. Thus, usage of methanol as a fuel blend, can in fact lead to higher efficiency of your engine!

Ethanol has about 34% less calorific value than petrol, which theoretically may mean a mileage which is one third worse than petrol. However, ethanol allows a more efficient process in combustion.

The reason for the more efficient process, is that ethanol has a higher octane number than petrol. This means that it can be ignited at a higher compression level than petrol without causing knocking. This effect compensates for the lower calorific value.

As a result, for most normal blends (10-15%), the mileage offered by both ethanol blends and pure petrol engines are almost the same. However, a 100% ethanol fuel would offer about 25% less mileage than a petrol engine.

Another advantage of usage of ethanol, is its environmental impact. Since ethanol is a pure fuel made of carbon, hydrogen and oxygen atoms, the exhaust fumes do not contain harmful NOx emissions.

Moreover, as ethanol combusts more efficiently than petrol, the exhaust fumes do not contain much of carbon monoxide, but mostly carbon dioxide, a relatively less harmful exhaust.

Thus, in general, in light blends of petrol and ethanol, we see a beneficial environmental impact.

Much of the criticism on ethanol, however, has been on the production of the fuel. It requires the usage of huge amounts of land and usage of potential food stuffs (sugar cane, grains). Moreover, there is a refinery process also. On the other hand, the plants planted for bio fuels, also help fighting the green house effect. Here's a playful drawing referring to this paradox: 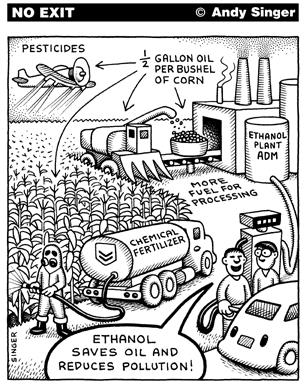 Implementation of Ethanol as alternative fuel

Brazil and US are the leading countries making use of ethanol as an alternative fuel. The government of Brazil has taken lot of interest in implementation of ethanol as fuel for cars. Some of the measures include:

As Brazil has a huge sugar cane industry, the introduction of ethanol as a fuel has been a support for that industry. Brazil today in facts mandates the use of biofuel in cars! 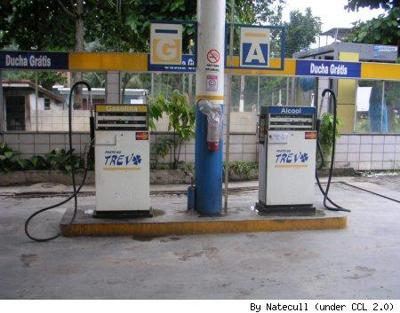 In this article we have attempted to give brief details of using alcohols as alternative fuels. The further explanation which includes explanations for terms like chemistry of combustion, calorific value evaluation etc. are beyond scope of article.

We can for now conclude that alcohols have the potential to be a great alternative fuel, the main advantage being the ability to manufacture the same from plants.

While in most advanced countries the same has been implemented practically, today in India availability and suitability of engines would be a roadblock. An initiative from the government in this regard is the need of the hour.