REVA unveiled its lithium ion battery version of REVAi city-run-around version which promises to speed up charging times and extend its range. The new lithium ion power train increases its range up to 75 miles which is 50 percent better than its existing model. The new REVA-L can be used for nearly 95 percent of all car journeys without needing to be charged. It can also be charged in just one hour at any of the special fast charging stations. Alternatively, the REVA L-ion can be recharged using ordinary mains electricity – but it takes around six hours to recharge the battery fully. 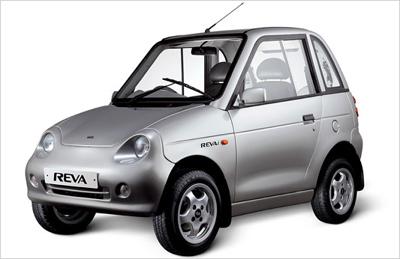 The top speed of the car is 50mph and the new battery has better life and performance in extremely cold weather. According to R. Chandramouli, President for Sales & Marketing, Reva Electric Car Company, the price of these cars will be around Rs. 7 to 8 lakh. The company plans to roll out the new models by end of 2009.

The new vehicle will be available for pre-order next month in UK, Ireland, France, Spain, Belgium, Norway, Cyprus and Greece, with delivery expected in May. Reva also plans to expand distribution across the rest of Europe in the coming year. Meanwhile, the competitor, Tata Motors, plans to bring hybrid version of Nano which is touted as “People’s Car.”