The powerful, stylish and performance based version of the Mercedes-Benz E-Class, the E63 AMG will be launching today at the Buddh International Circuit in Greater Noida. Industry experts are of a view that with the launch of E63 AMG, Mercedes-Benz is continuing its aggressive policy towards the Indian car market. The German luxury car maker has been quite open about its operations in India, declaring 2013 as the 'Year of the Offensive'. This strategy is aimed at reviving the firm's dominance in India, which has been challenged by its compatriots Audi and BMW. 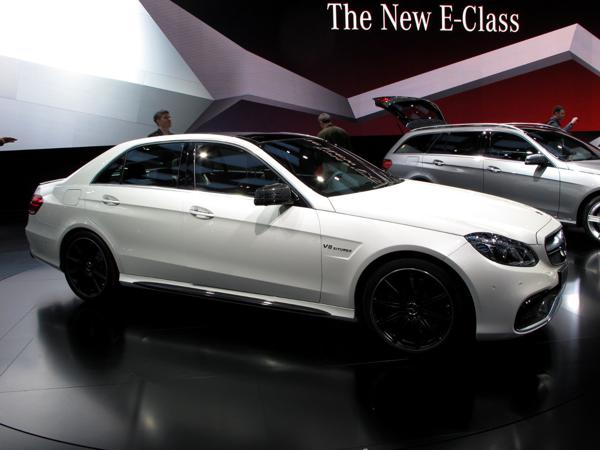 Mercedes-Benz has already introduced a number of cars this year, such as GL-Class Sports Utility Vehicle (SUV), A-Class premium hatchback, E-Class saloon and the B-Class Diesel. These operations have been bearing fruit as Mercedes-Benz sold a total of 1756 units in the second quarter of 2013 as compared to 1327 units in the corresponding period last year. Not letting the gathered momentum dampen, the German luxury auto maker has decided to up the ante by introducing more performance oriented cars.

The E63 AMG, in particular, has created a lot of buzz among critics and consumers, who expect this premium saloon to render a powerful performance. To be brought in India as a Completely Built Unit (CBU), the E63 AMG was seen first at the Buddh International Circuit during the Mercedes-Benz India Corporate Star Experience. The E63 AMG is available in base and S version in the global market, where it has enjoyed great success. The Indian version of the E63 AMG will be powered by a 5.5-litre twin-turbo V8 petrol engine, capable of churning out a maximum power of 557 bhp and peak torque of 720 Nm. Also, the twin-turbo engine is mated to a 7-speed automatic transmission gearbox, which will channelise the produced output to all wheels of the car.

It must be noted that there will be several performance enhancing features in the upcoming E-Class, such as direct petrol injection, four-valve technology with camshaft adjustment, generator management and biturbocharging. Style is an important factor in the design of the E63 AMG, which includes new bumpers, radiator grille in silver chrome, wind splitters and a rear spoiler lip. The classy interiors of the E63 AMG include door armrests, sports seats, silver seatbelts, Nappa leather steering wheel and Alcantara inserts. Other highlights of the car include active parking assist, 14-speaker Bang & Olufsen BeoSound surround sound system, Attention Assist and Collision Prevention Assist.

The Mercedes-Benz E63 AMG has performed well in the global market and has been appreciated by a number of car buyers. However, conditions in the Indian car market are not so favourable with the hike in fuel prices and consistent fall in the value of rupee. Thereby, it remains to be seen whether the buzz and excitement created around Mercedes-Benz E63 AMG transforms into sales.

Nissan Terrano likely to be launched in September 2013