Top Indian utility vehicle manufacturer Mahindra & Mahindra is confident about its growth in the pick-up vehicle segment, since it already commands a 54 per cent market share in this sector. As per a top official of the company, it was mentioned that with this share, Mahindra is already miles ahead of its rivals. This was expressed at the sidelines of an event held for the launch of its latest Bolero Maxi Truck Plus model in South India, on May 7, 2013. 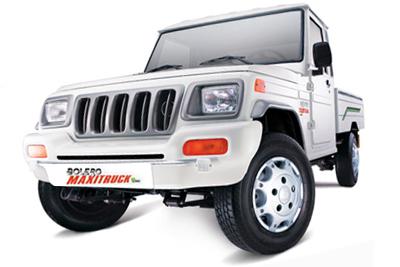 Commenting on the company's current status, Mahindra Senior General Manager for brand pick-ups and Maxximo marketing Mahesh Kulkarni said, “We hold 54 per cent of the market share and sold around 1.2 lakh units in 2012-13. While the overall market for the pick-up segment grew by 73 per cent, M&M grew by 41 per cent in the last financial year. This fiscal too we expect a good growth.” He further mentioned that the company is confident of going past industry growth figures of 10-12 per cent for the pick-up segment, as given by Indian auto governing body, Society of Indian Automobile Manufacturers (SIAM). About the current year's plans, Kulkarni also said, “This year we will focus on developing new models in the commercial vehicle segment especially in the niche categories such as cold storages, personal captive requirement of businesses and logistics to boost our growth.”

At present, Mahindra's offerings in the pick-up market consist of Genio, Bolero, Alfa and Gio models. In the previous year of 2012, sales went up due to frenetic retail activity in urban areas and aggressive promotion of finance schemes for buyers of vehicles from this segment,

At the launch of the 'Bolero Maxi Truck Plus' (BMT Plus), it was announced that the vehicle is available at a price tag of Rs. 4.36 lakh, for the BSIII variant and Rs. 4.46 lakh for the BSIV variant (both prices ex-showroom Chennai). It has been built on the ever-reliable Bolero Pick-up platform, with an objective to the needs of urban goods transportation in style. The vehicle has the company's tested 2523 cc common-rail engine, which is also used in the Bolero. A high mileage of 17.7 km per litre is delivered by using this engine.

Chevrolet Enjoy joins the league of compact UVs in India