Much to the auto enthusiasts’ amusement, Lexus revealed the 2018 LS 500 F Sport at the New York Auto Show. The F Sport gets race track dynamics as well as more aggressive styling cues as compared to the regular standard variant. The upcoming model will be offered in two additional shades of blue and white. 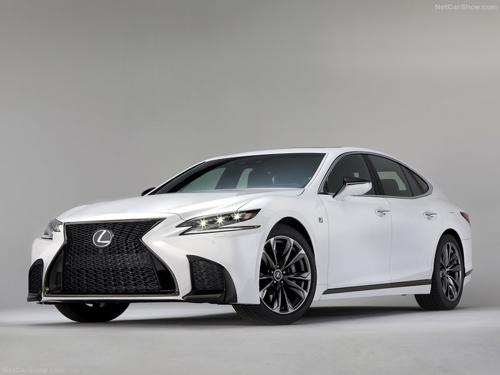 Mechanically, the Lexus LS 500 F Sport is expected to be powered by a twin-turbo, 3.5-liter V-6 engine that is mated to a 10-speed automatic transmission that generates 409bhp of power and 599Nm of torque. The rear-wheel-drive mechanism enables the vehicles to sprint from 0-100kph in less than 4.5-seconds. The vehicle is offered with normal as well as sport driving modes. Additionally, the vehicle will also be offered in hybrid version which will get two electric motors and an Atkinson-cycle, 3.5-liter V-6 gasoline engine that generates 296bhp of power and 349bhp of power.

To distinguish it from a regular version, the LS 500 F Sport by Lexus gets 20-inch alloy wheels along with 6-piston front and 4-piston rear brake calipers. As for the interior, Lexus offers bolstered seats with perforated leather and ultrasuede, as well as aluminium pedals and footrest. The vehicle gets a specially set-up air suspension system that has been designed for a sportier ride. For safety, the vehicle gets Lexus’ Dynamic Handling tech, which manages the ABS, traction control, ESC and steering to control based on speed. Though there are no plans for its India debut anytime soon, if introduced, it might be sometime by late 2018 or early 2019.