Iron Man 3, the latest sequel to popular action movie series based on the Marvel Comics action hero, featured many stunning Audi super sports cars. The high end Audi models are seen driven by the Iron Man or Tony Stark (played by Robert Downey Jr.) on numerous occasions throughout the movie. 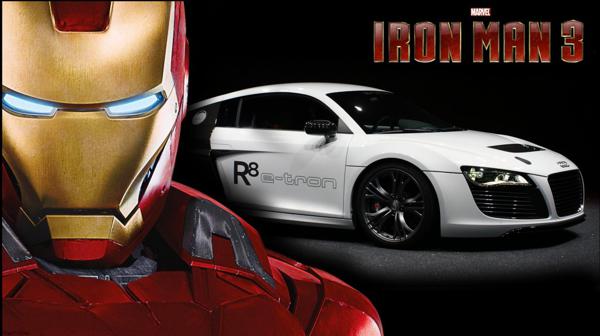 Tony Stark’s favourite Audi super car happens to be the R8 e-Tron concept hyper car. The other sports cars made by German auto maker for use in the movie are R8 Spyder and S7 Sportback. Audi R8 e-Tron is arguable the most stunning of all super cars featured in Iron Man 3. The hyper sports car is powered by two electric motors, which produce a combined peak power and torque outputs of 377 bhp and 820 Nm, respectively.

Audi R8 was present in the previous Iron Man movie and its facelift version has been used in the latest flick as well. The 2014 Audi R8 super car comes fitted with a 5.2 litre V10 mammoth of an engine that churns out a highest power output of 550 bhp, along with a peak torque delivery of 540 Nm. The power is fed through the cutting edge Audi’s Quattro All Wheel Drive (AWD) system and the engine assembly boasts of the S-Tronic seven speed automatic gearbox. This stunner accelerates 100 kmph in just 3.3 seconds from a stand still. Further, the 2014 Audi R8 super sports car can attain a maximum speed of 315 kmph.

Apparently, a number of high end luxury saloons were also used in the movie, such as A8L, A6 and the S5 coupe. Apart from sports cars and luxury sedans, Audi’s Q5 and Q7 premium sports utility vehicles (SUV) were also seen scorching roads in the latest instalment of the Iron Man franchise. The action flick gave the perfect platform to Audi, in order to showcase the might of its super sports cars that were loved by none other than the Iron Man himself.