Honda BR-V has been discontinued in 2020. We are showing the last known price for BR-V.

The new Honda BR-V is many things. You could call it yet another city SUV in a segment that has the hot selling Hyundai Creta and the recently updated Renault Duster. You could call it a meaner, more desirable version of the Honda Mobilio. Or, you could even think of it as the most sensible buy in the up to Rs 10 lakh price brand, for it has three rows of seating. But, how is it as a product? A day in Rajasthan did present us with some answers.

The BR-V looks best from the front three quarter. That huge chrome grille, the big headlamps, the chunky bumper complete with a pseudo skid plate, does give the BR-V SUV overtones. The tall roof rails helps too.

It's not the best looking SUV when viewed from the rear, though. But, it does look distinct, even if a tad busy with those large wrap around tail lamps and reflectors running across the width of the tail gate. It is in profile, that the BR-V fails to mask its Mobilio roots. It runs larger 16-inch wheels (which strangely still look under-tyred), has 30mm higher ground clearance at 210mm, and runs the mandatory black cladding (mandatory for city cars posing as SUVs, Duster and Creta included). But, the doors, the roof line and even the rear quarter panel screams Mobilio.

Now, if you haven't heard or seen a Mobilio, which is possible given the MPV didn't do too well, you might not be able to draw comparisons. And if you can't, then you will end up liking the overall presence of the BR-V.

We are in the top of the line VX trim. And it certainly feels better than the Mobilio here. But, it can't match the Creta for opulence, quality or the feel good factor. The design is likeable though - lots of lines, cuts, surface changes and finishes. It might lack harmony but is attention grabbing.

The BR-V's insides are ergonomically sound too. The driving position is more car like than SUV, and therefore feels natural and comfortable. The steering, the gear shifter, and the pedal positioning feels absolutely right. Even the controls - stalks for light and wipers, buttons for climate control and stereo, and the accessibility to the various cup and bottle holders and stowage spaces is easy to get used to.

Space, of course, is a big plus. The BR-V isn't as wide as the Duster or the Creta, so shoulder room isn't exactly impressive. And three adults in the second row is a squeeze. But, in terms of head room and making one believe  that they are in a spacious car, the Honda BR-V does really well. Managing kneeroom for all three rows of occupants is what the BR-V excels at thanks to a sliding second row. And if you are going to be using the BR-V for weekend getaways, the boot space works out fine too, even with the last row in place. Plus it has comfortable seats and all of them recline. It's also easy to get into the last row courtesy the full tumble function for the second row of seats. The low ingress height helps too.

Feature wise, the Honda BR-V struggles to match up to the Hyundai Creta. It gets keyless entry and go, a multifunctional steering wheel, single zone climate control with rear aircon vents and a trip computer as well. Plus, the BR-V gets front dual airbags as standard across all variants. But, unlike the Creta, you can't have the BR-V with six airbags, or a touchscreen multimedia system with internal memory and satnav, or (and this is a big miss) parking sensors; forget a reversing camera.

The Honda BR-V gets two engine options, both 1.5-litre, four cylinder units. The same ones that power the Honda City. The petrol makes 118bhp of max power and 145Nm of torque. It is an engine that's known for its nice sound, its refined nature and its ability to deliver both in the mid and top end of its rpm range. And it is no different in the BR-V. The only real downside if at all is the shift quality of its 6-speed manual. It's a little too notchy for our tastes. The petrol also comes with a CVT option for a less strenuous drive.

The diesel, meanwhile, makes 99bhp and 200Nm of torque. And it too comes with a 6-speed manual gearbox. There is however no CVT or automatic option for the diesel yet. As you'd expect, the diesel is the torquier of the two. And even though it has a much smaller power band, it gathers momentum without a fuss. Only thing to note here is to keep that rpm needle over the 1500rpm mark, because otherwise the lag will bog you down. Now Honda says, in order to derive this peppiness from the engine - not to mention enhance its pulling power (for it is an SUV) - the final drive ratio (compared to the City which runs the same engine and gearbox combo) has been shortened. And again, like the petrol, the gear shifts for this 'box are notchy and require some effort.

The one thing we loved about the Mobilio and as an extension like on the BR-V as well, is its ride and handling ability. Compared to the Mobilio, the suspension has been stiffened to compensate for the increased weight but the travel remains unchanged even though the BR-V sits higher than the MPV.

As a result, when travelling alone or two up, the firmness in the ride is obvious. Having a slightly noisy suspension doesn't help matters either. But load it up, and the ride improves. There's hardly side to side movement and the BR-V ends up absorbing bumps with a fair bit of suppleness. This should be great news for those who want a long distance tourer packed to the gills with food and family.

This setup helps the Honda BR-V when you want to push it a little harder than one would think  is sensible. We didn't get too many corners, but from whatever little we did, we liked the quick and predictable steering response, the sure -footedness, and the reined in body roll. Something we did get a lot of, however, was undulating stretches, long and fast corners, and wayward motorcyclists. And in these conditions, the BR-V shone. It rides flat over undulations no matter what speed, feels planted and adjustable around  fast bends, and brakes brilliantly with hardly a twitch when a motorcyclist turns into your path without looking.

The Honda BR-V might be many things, but as of now it must seem like a great buying proposition to both upgraders, and first time young car buyers. The BR-V has the dynamics, the flexibility, the economy and the brand to do it. But, it can't match the likes of the Creta in terms of upmarket appeal and desirability. It's also not exactly SUV material with long overhangs and no all- wheel drive option.

And therefore, it must be priced very aggressively. Rs 8.5- Rs 10.5 lakh for the petrol and Rs 9.5 lakh to just under Rs 11.5 lakh for the diesel could work wonders here. If the BR-V hits these numbers, it's a thumbs up from our end.

Find a list of all 10 petrol and 8 diesel versions of Honda BR-V. This table includes on-road price which covers all costs like RTO and Insurance.

The crossover SUV and SUV market in the country is growing steadily and Honda is the latest manufacturer in the country to hop on to the SUV bandwagon. Based on the Mobilio, the BR-V is only the second SUV ever offered by Honda to its Indian customers.

Further to this, read Honda BR-V Road Test details by our expert.

The BR-V stands for Bold Runabout Vehicle and is developed by Honda R&D Asia Pacific Co. Ltd. (HRAP), in Thailand, for the Asian markets. Based on the Mobilio or stretched Brio platform, it stands tall with a high ground clearance and wider front and rear tracks. Cosmetically, the BR-V shouts out its sporty looks with the fascia sporting a wide chrome grille, projector headlamps, a large air dam, round fog lamps and chiselled bumpers. The aggressive presence is further increased by the large alloy wheels and high roof rails. The rear sports wrap-around tail lamps that extend under the wind screen and the registration plate is placed at a lower level similar to the Creta. The black body cladding all over also adds to the sporty character.

The BR-V gets a seven-seat arrangement and three-row configuration and Honda claims class-leading levels of space with this vehicle. The interior is all-black and the dashboard gets silver accents to add a dash of premium. It gets automatic climate control with separate blower for rear passengers and steering mounted audio controls. The three-pod instrument cluster gets the rev-counter at the left, the speedometer at the centre and a multi-function display embedded in the right-most dial. The centre console gets a 2-DIN audio system with AUX, USB and Bluetooth inputs but misses out on the much expected touch-screen.

The Honda BR-V is powered by the 1.5-litre, four-cylinder, i-VTEC mill with the availability of a six-speed manual and a CVT transmission. The 118bhp petrol engine develops 145Nm of torque. There will also be the tried and tested 1.5-litre diesel mill from the Mobilio, which comes mated to only the six-speed manual gearbox and develops 99bhp of power and 200Nm of torque.

The straight-line stability again is commendable and the BR-V feels confident and completely home handling the fast sweeping corners too.

The BR-V gets disc brakes up front and drum brakes in the rear complemented by ABS and EBD.

Mileage
The 1498 cc Diesel - powered variant delivers a fuel economy of 19 kmpl in city and 21 kmpl on highways, while the Petrol variant offers a mileage of 13 kmpl on urban roads and 15 kmpl on freeways, respectively.

The BR-V gets dual front airbags from the V trim and ABS and EBD from the S trim.

The Honda BR-V will go up against the Hyundai Creta and the Renault Duster in the Indian market along with Nissan Terrano. 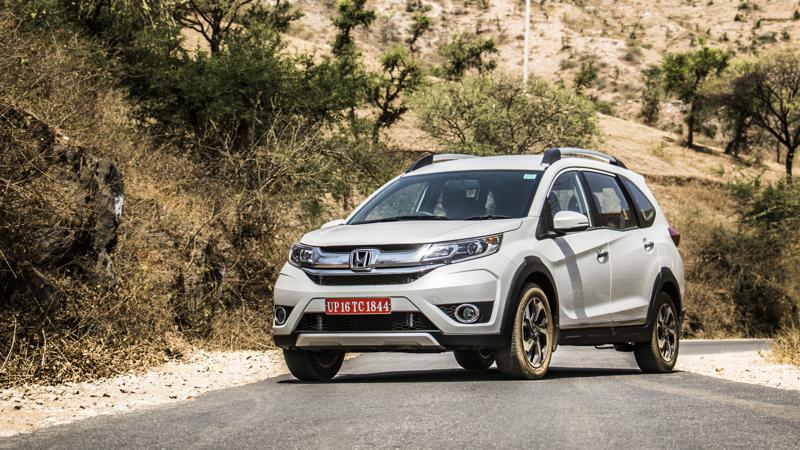 Honda CR-V, Civic and BR-V available with discounts up to Rs 5 lakhs

Honda BR-V Select Honda Car India dealerships are offering discounts across the model range for the month of December 2019. These benefits are available in the form of cash discounts, exchange 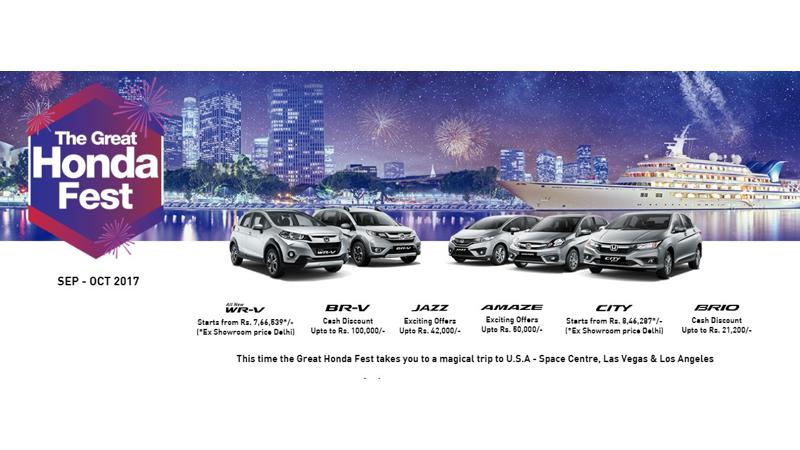 Honda has started giving discounts of up to Rs 1 lakh on select car models this month. The benefits on Honda cars include cash discounts, free insurance, exchange bonus, a corporate discount It&rsquo;s the battle of the siblings and this time around it has emerged that Honda Jazz has managed to beat out the new BR-V crossover in terms of numbers, just marginally though.&nbsp; The Jazz

The Honda BR-V VX variant has been recently launched with new features. This trim will now get Digipad and rear parking camera and sensors, like the top-of-the-line City sedan. Honda BR-V VX

The Hyundai Verna is back! And time around it&rsquo;s the fifth generation for the Indian market. The main rivals for this car are the Honda City and Maruti Suzuki Ciaz but now there are SUVs in the